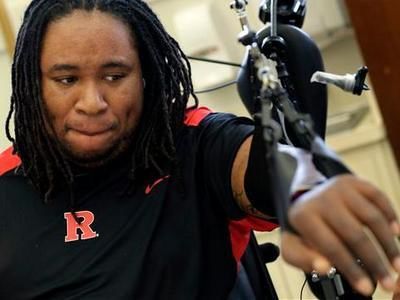 Until now, building an NFL team roster was all about business, and never sentiment. This week the Tampa Bay Buccaneers coach is receiving praise for an unconventional, yet inspiring choice to fill his pre-season roster.

A college football player critically injured and paralyzed during a 2010 game has served as an inspiration to his Rutgers teammates and fans, battling back from a debilitating injury. Now he can be a national inspiration to others with spinal cord disabilities.

Even though the young man can barely walk, and will never play football again, his former coach, Mike Schiano, now a Tampa Bay coach, signed Eric LeGrand to an NFL contract with the Buccaneers as a gesture honoring the courage and example he has shown to all since the devastating injury.

According to an Associated Press story, LeGrand was eventually able to stand upright with the help of a metal frame. He resumed his studies via video conferences and one year after the injury, led the team onto the field before a game. He also did some broadcasting work for the school and is on pace to graduate from Rutgers this fall.

(READ the story in Buccaneers.com)