Home All News Self-Help Coping With Disappointment Like Edison 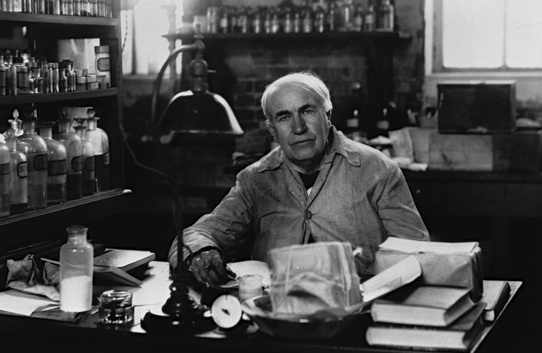 “If he listened more to the inner voice and less to the clamorous voice of the external world, he would find a strength and a courage that would insure him against discouragement.”

I love the story that Charles Edison, former Gov. of New Jersey, tells of his father, Thomas Edison, when in 1914 his Edison Industries of West Orange, New Jersey was practically destroyed by a great fire. Most of Edison’s life work was going up in flames. The young man, concerned, looked about for his father and he finally came upon him. The man’s face was ruddy in the glow of the flames. He wrote, “My heart ached for him, no longer a young man, everything being destroyed.”

“Then my father spotted me and he called out, ‘Charles, Charles, run get your mother. She will never see anything as beautiful as this fire as long as she lives.’”

So, even in its destructiveness, Edison saw the beauty of the fire because, you see, he was a researcher. He’d spent all of his life learning how to cope with disappointment. The next morning, walking about the charred embers of all of his dreams, Edison said, “There’s great value in disaster because all of our mistakes are burned out. Thank God we can start again!” Three weeks later the Edison Company delivered the first phonograph.

You might say, “But Edison was an unusual man. He was different. He was special.” Or, we say of Jesus, “But he was the son of God.” But Jesus said, “All that I do you can do too.”

Each of us has the God potential within to rise above any and all disappointment. In life you will have many trying times but there is a tremendous capacity within us to rise above any situation, any challenge, any limitation. Always we must know that if I’m discouraged or disappointed it’s not because of what happened, it is a result of my own consciousness, my own negative awareness. You can decide that You’re going to meet all things from the highest possible perspective. Your job is not to *set* things right but to *see* them right.

The problem of disappointment always comes from neglect of one’s spiritual life.

“The problem of disappointment always comes from neglect of one’s spiritual life. I’m not talking about going to church or worshipping God in a formal way. I’m talking about his awareness of his own wholeness, the awareness of his own God-Self manifesting within him. So if he listened more to the inner voice and less to the clamorous voice of the external world, he would find a strength and a courage that would insure him against discouragement.

“The sad thing is that most persons are obsessed by the pessimistic wailings of hearsay and what they read in the papers and the world’s tragedies and troubles. So they have little time to listen to the voice of the infinite within themselves. In a sense, as the Christmas story reveals, they had no room in the inn to receive the creative flow.

Now of course we should understand that if you love your misery and you want to nurse your discouragement and your feelings of failure, it’s your privelege. Anyone has a perfect right to stew in his own juices if he wants to. But remember, you’re in your cave because you want to be there. When you’re sick of being so negative you can open the window and turn on the light at anytime. Anytime you can overcome. The disappointment is a result of your own consciousness. Your own negative awareness.

Unity minister Eric Butterworth, 86, Theologian, Lecturer, and Author of 16 books died April 17, 2003. He inspired hundreds of thousands with his message that positive attitudes can create personal renewal. His congregation was Unity Center of NY; his pulpit, New York’s Lincoln Center. The above is reprinted with his permission.