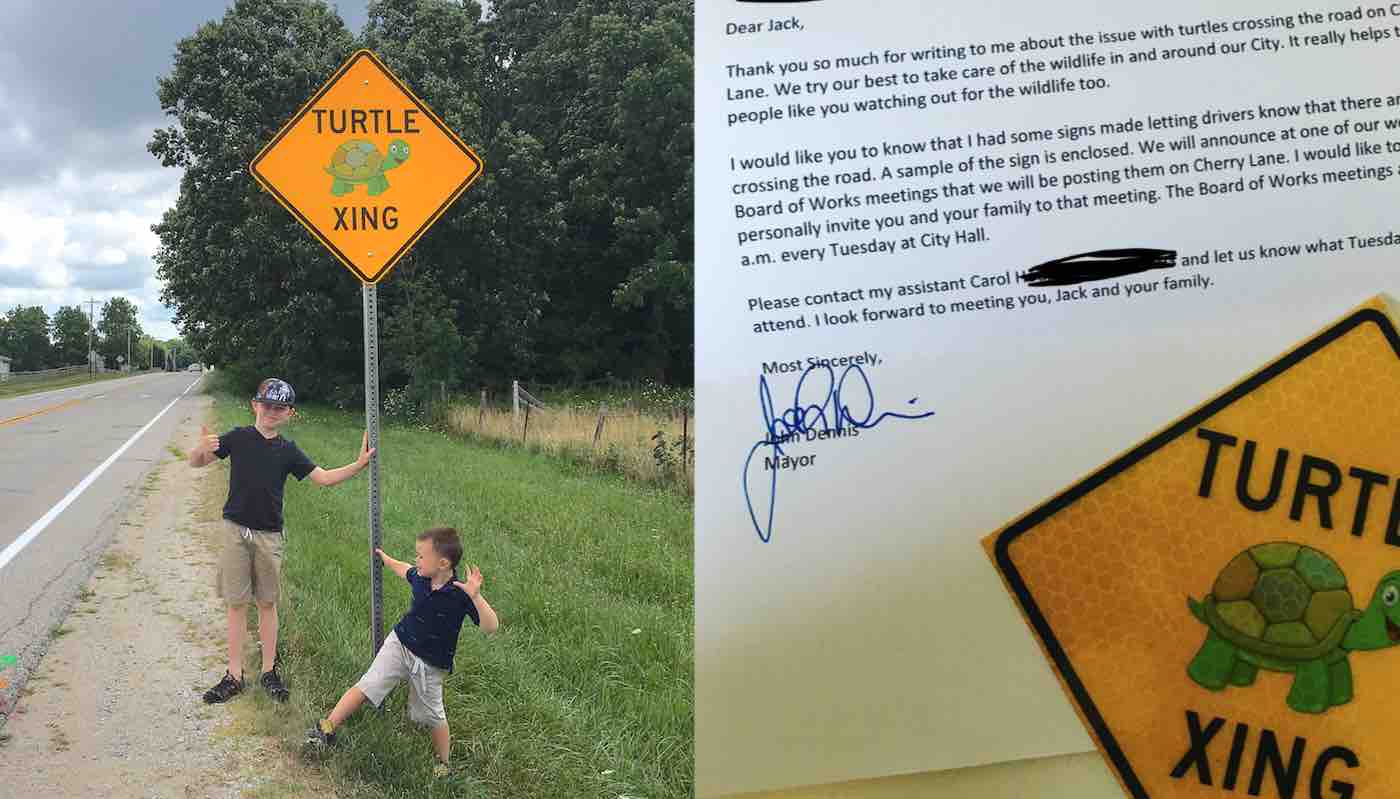 A second grander from Indiana has become a local hero to turtles after he wrote a letter to the mayor about the plight of his reptilian friends.

Since the town of West Lafayette has many small ponds and lagoons dotting the landscape, it’s not uncommon for turtles to end up on a busy roadway.

Unfortunately, not every turtle is able to cross the street without getting hit by a car.

8-year-old Jack Wietbrock had been heartbroken to see several dead turtles on one particular local street in town. When he and his mother were eventually forced to rescue a baby turtle who had been attempting to cross the street last month, Jack resolved to do something about the situation.

“We were able to save that baby, but we had a couple of times that were some not-so-great moments of seeing turtles on the side of the road,” Jack’s mother Michelle told Journal and Courier. “I was trying to think of something productive to say as a parent. And Jack said, ‘Maybe we should send a letter to the mayor.’ I was like, OK, we’ll send him one.”

That very same night, Jack went home and wrote a letter to West Lafayette Mayor John Dennis reading: “Dear Mayor Dennis, There are turtles crossing the road and they need our help. Can you please put up a turtle crossing sign? Thank you.”

🐢 After seeing several ☠️🐢 in the roadway my son suggested writing a letter to the mayor. He wrote back and now we’re getting “turtle crossing” signs. #ProudMom #makeadifference pic.twitter.com/sMIGK9u6HG

Mayor Dennis wrote a letter to Jack saying that he had been moved by the youngster’s compassion for the local wildlife. Since the city’s parks department has a machine for making custom signs, Dennis said that he had commissioned them to design the city’s first ever “turtle crossing” sign.

Not only that, Dennis said that the sign was to be presented at a town meeting—and he wanted Jack to help unveil the sign.

The signs were later erected onto the street—and Jack’s mother said she could not be more proud of her son.

She and Mayor Dennis now hope that Jack’s initiative will inspire other youngsters to take action in their community.

“The great thing about West Lafayette is we embrace the unique and, in some cases, the odd,” Dennis said during the presentation. “So, we felt, you know what, there’s something we can do here that’s going to be kind of cool and celebrates Jack’s initiative on making us aware of a problem.”

A few weeks ago, my son wrote a letter to our awesome @MayorJohnDennis @WestLafayetteIN about the need for a turtle crossing after finding a few ☠️ and saving a baby 🐢. This happened today and I couldn’t be more proud! #makeadifference 🐢 🚙 pic.twitter.com/pg3vRwQKnM