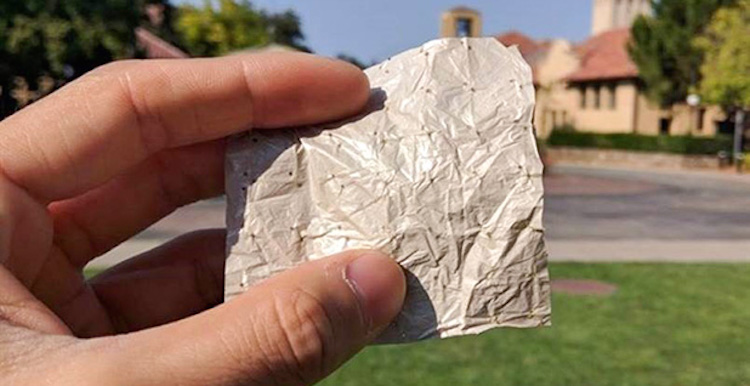 Turn off your air conditioner and stay cool in your tee shirt instead.

That’s the idea behind a new wrap-like material that Stanford University scientists say could be made into “cool” clothing, the use of which could slash emissions and energy consumption in buildings.

If woven into fabric, the wearable cloth could keep humans cool on the hottest of days, eliminating the need to adjust the thermostat or crank up a fan. That could make a dent on a major source of U.S. greenhouse gases, the researchers say.

The material works by allowing body heat to pass through it in a way that cotton and other typical clothing do not. At the same time, it releases moisture and reflects sunlight, just as the breathable clothing does.

It also would be inexpensive, with a comparable cost to cotton, said Yi Cui, an associate professor of materials science and engineering at Stanford and co-author of the research published yesterday in Science.

“No one has created something like this before,” Cui said. “This is an exciting opportunity.”

Infrared radiation (IR) released from the human body is a key factor with heating and cooling. Blankets, for example, rely on trapping such radiation for warmth. In a typical indoor setting, about 50 percent of heat loss from the body occurs through IR.

Finding a textile that cools is an engineering challenge, though, because the wavelength of IR overlaps with visible light. The overlap makes it difficult to find a material that both reflects sunlight and allows the passage of body heat. Cotton, for example, reflects sunlight but traps about 98 percent of IR released from the body.

Existing workout clothes can have a cooling effect, but only by releasing moisture, meaning a person must sweat first to cool off.

MORE: Shaving with Lasers Instead of Blades Will Save Money and the Environment

The researchers tinkered with a material known as nanoporous polyethylene, used to produce lithium batteries. It is in some ways similar to common plastic wrap, but with characteristics more conducive to clothing. Unlike its common household counterpart, it is not see-through because of a unique pore size of 50 to 1,000 nanometers. That size sits in a narrow range that allows the reflection of most visible light and the passage of more than 95 percent of radiative body heat.

Like workout clothing, the material was treated with an additional chemical to allow it to whisk water away for an additional cooling effect and was punctured to increase air flow. Two sheets were layered with a cotton mesh and tested on a surface simulating human skin. In comparison with cotton, the new material kept the tested skinlike surface at least 2 degrees Celsius (3.5 degrees F) cooler.

From an environmental perspective, Massachusetts Institute of Technology scientist Svetlana Boriskina noted that a 1 to 4 C shift in a thermostat could save up to 45 percent of the energy required to cool a building.

The technology mimics what’s found in some animals like the Saharan silver ant, which has hairs with a similar ability to release body heat while also reflecting sunlight, Boriskina said.

Still, the cloth was not tested on human subjects. It’s also not yet in the form of a T-shirt or other wearable item. That is the next step, along with making the material softer and more cottonlike in its texture, Cui said.

Beyond clothing, researchers are considering applications for cooling things such as tents and vehicles. They also are examining how to add colors to the textile without changing its functionality.

The idea of cooling humans individually without air conditioning is an active area of research, considering that residential and commercial buildings consume about 41 percent of total U.S. energy use. The Advanced Research Projects Agency has an entire program dedicated to finding breakthrough technologies that cool people directly, either through cooling shoes, robots or specialized office chairs (Greenwire, March 8).

Cui said the fact that the base material already is used extensively in the battery industry could make it easier to scale up.

“If you want to make a textile, you have to be able to make large volumes inexpensively,” he said.

[CORRECTION: We missed the decimal point in the original version, typing 35 degrees–instead of 3.5]