Home All News Animals After Groom Met Wife-to-Be at Dog Rescue Center, They Make the Rottweiler... 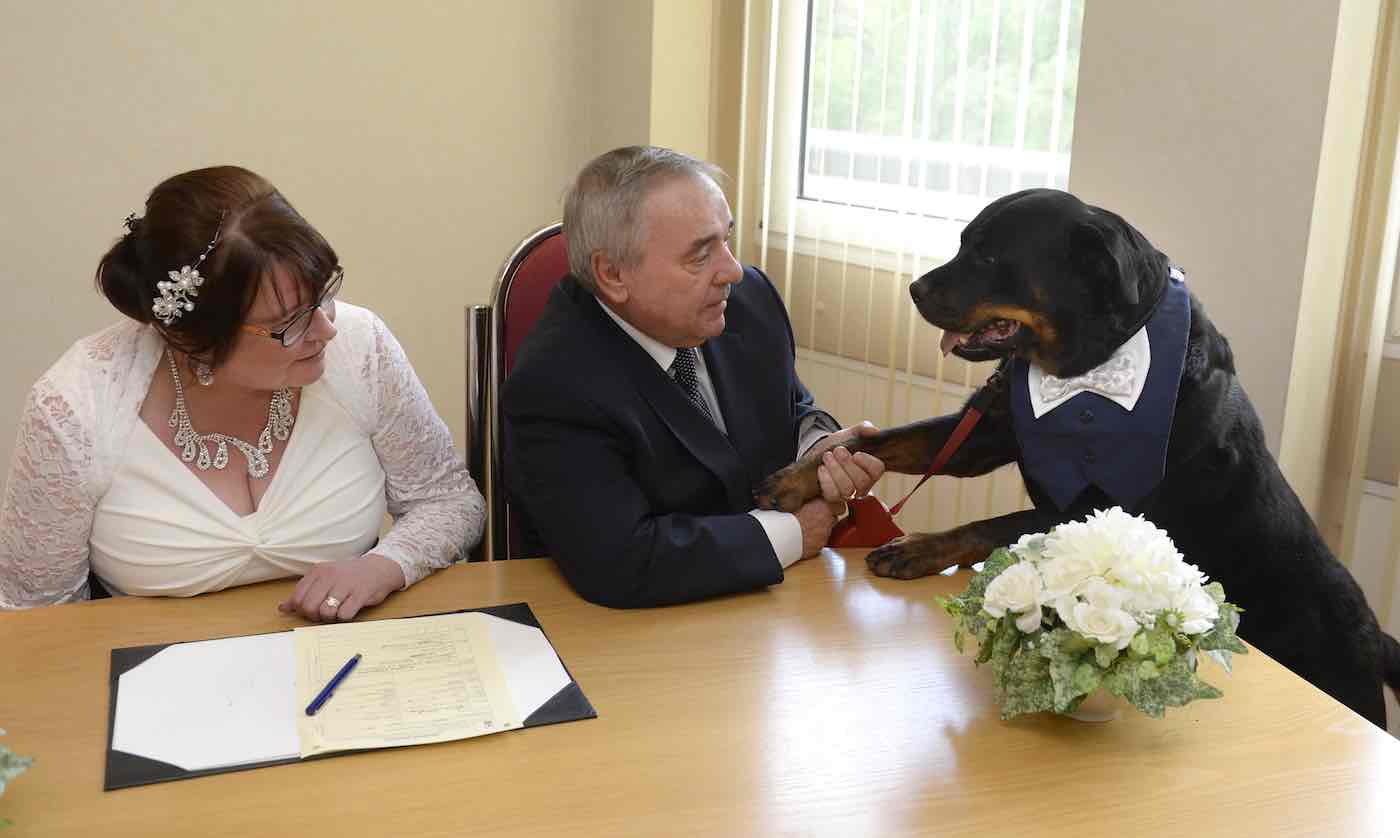 This dog isn’t just his ‘man’s best friend’ – he is also this groom’s best man—and sported a mini-tuxedo for the wedding.

This was the adorable moment that a Rottweiler named Jack became the best man for Christopher McCarron’s marriage to Margaret Allison earlier this week.

The happy newlyweds tied the knot in a civil ceremony in North Lanarkshire, Scotland. They say that Jack’s involvement in the wedding seemed only fitting considering how the groom met his wife-to-be at a dog rescue centre.

The well-behaved pup sat quietly through the short ceremony, wearing a mini tuxedo attached to his collar—and the pooch even sneezed when McCarron said ‘I do’.

“We had a lovely sentimental day – and Jack played a big part,” said McCarron. “He loved it, he really did.”

McCarron adopted the Rottweiler after the death of his son, who died three years ago at age 43.

In the wake of his son’s death, McCarron took stock of his life, sold his business, and got a divorce.

He hoped that getting a dog might help him recover from his grief, and he was immediately won over by Jack, who had been at the local animal shelter for nine months.

LOOK: Woman Quits Successful City Career So She Can Live in the Woods With Over 100 Rescued Animals

And in a sweet twist of fate, McCarron met his new love Allison while he was out walking Jack at the rescue center – and he promised to keep her updated on his pet’s progress.

Romance blossomed and the newlyweds now consider Jack to be a part of their family.

“I wouldn’t have considered getting a rescue dog based on his age; he’s around 6 years old,” says 69-year-old McCarron. “But when he went up to me, we just clicked. Little did I know that I’d meet my future wife at the rescue center too.

“I don’t believe that I rescued Jack – I think he rescued me,” he added. “When we decided to get married, Jack had to be there.”

Allison, who is a care home worker, had initially been looking to rescue a small dog from the rehoming center, but she did not find anything suitable.

When she met McCarron, however, they bonded over their shared love of dogs – and how they both witnessed the transformation of Jack’s character since he was welcomed into a loving home.

Jack spent most of his life as a guard dog who was cooped up in a kennel, and when McCarron adopted Jack in 2015, he was warned that that the pup should not be allowed to play with other dogs.

McCarron and Margaret, on the other hand, believe that Rottweilers have unfairly been given a bad reputation as a breed, and they should be given a chance.

“This is our family now; me, Margaret, and Jack,” mused McCarron.