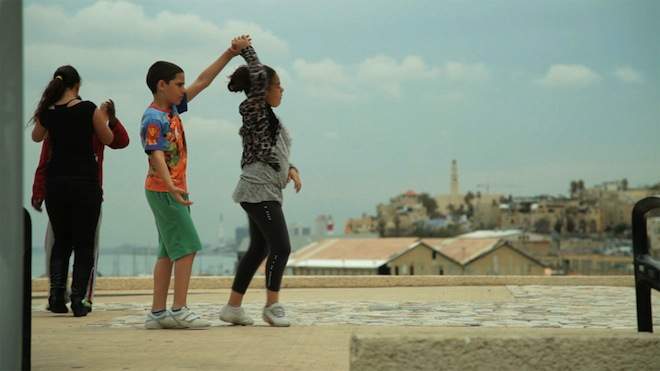 “What I am asking them to do is to dance with the enemy,” says Pierre Dulaine in the 88-minute documentary, Dancing in Jaffa.

Dulaine, a four-time world champion ballroom dancer, is fulfilling a life-long dream, having taken his New York City program, Dancing Classrooms, back to his city of birth, Jaffa.

For generations, Jaffa has been a city divided by two communities that continue to grow increasingly apart. Palestinians and Israelis live together but often segregated lives.

Over a ten-week period, Dulaine teaches Jewish and Palestinian children to dance side by side, hand in hand, and compete together, working as a team. The 2013 film directed by Hilla Medalia focuses on the lives of three children, all of whom who are forced to confront issues of identity, segregation, and racial prejudice as they dance with their enemy. We watch this dance program transform their lives, confirming his belief that dance can overcome hatred and provide the first steps towards real change.

Dancing Classrooms, is still going strong two years after the ballroom dance legend began the program in his ancestral home. The film has won several audience awards after its world debut at the Tribeca Film Festival.