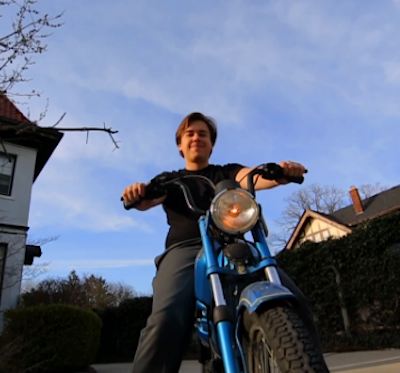 Citywide transit options in Detroit in 2012 were bleak. Bus service was limited by severe budgetary cutbacks. The light rail project was abandoned.

25 year-old entrepreneur Andy Didorosi was disgusted, so he bought a bus and started the Detroit Bus Company. His transit innovations include a high tech app that lets riders know exactly where the buses are at any moment.

“In other cities… the city runs without you,” he explains in the video below. “But here in Detroit you have a chance to make a real difference. You can create a transit system, or you can create a new way to educate kids. It’s unlike anywhere else in the world.”

The Skillman Foundation approached him to create a public-private partnership that would create a crowd-sourced transit system, helping people get to work and children get safely home from after school programs. An online portal allows the public to input where they need to go and the time of day.

When The Detroit Bus Company is only moving buses exactly when and where they’re needed, it cuts costs by 90 percent, Didorosi told the Huffington Post.

The company will even unveil an online portal soon to show parents every after school program available for kids in their regions.

(WATCH the GREAT video below – Read the story at HuffPo)