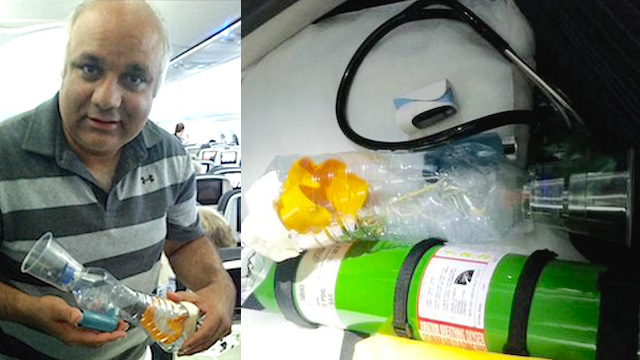 Flying at 35,000 feet over the middle of the Atlantic Ocean, a doctor cobbled together a makeshift medical tool — partly from trash — to save a baby’s life.

Four hours into the seven-and-a-half hour flight from Spain to the U.S., a two-year-old had an asthma attack, but her medicine was in the family’s checked luggage.

Dr. Khurshid Guru answered a flight attendant’s call for a doctor and quickly assessed the situation.

He realized girl needed a pediatric nebulizer, a device that delivers a measured dose of medicine to the lungs through a sustained mist. There was only an adult version onboard, but the dose was too strong for the infant. Dr. Guru decided he’d have to make the tool they needed.

Cutting, taping, and working quickly, he put all the parts together to create a makeshift device that allowed him to control the dose and got the baby breathing again.

“Thank God the kid did well!” Dr. Guru tweeted along with a picture of his contraption after they landed.

Dr. Guru doesn’t have much experience with pediatrics, but he is director of the Roswell Park, New York, Cancer Institute’s robotic surgery department and is familiar with making technology do its job to save lives.

He may have been the best doctor anyone could have hoped for on that flight.