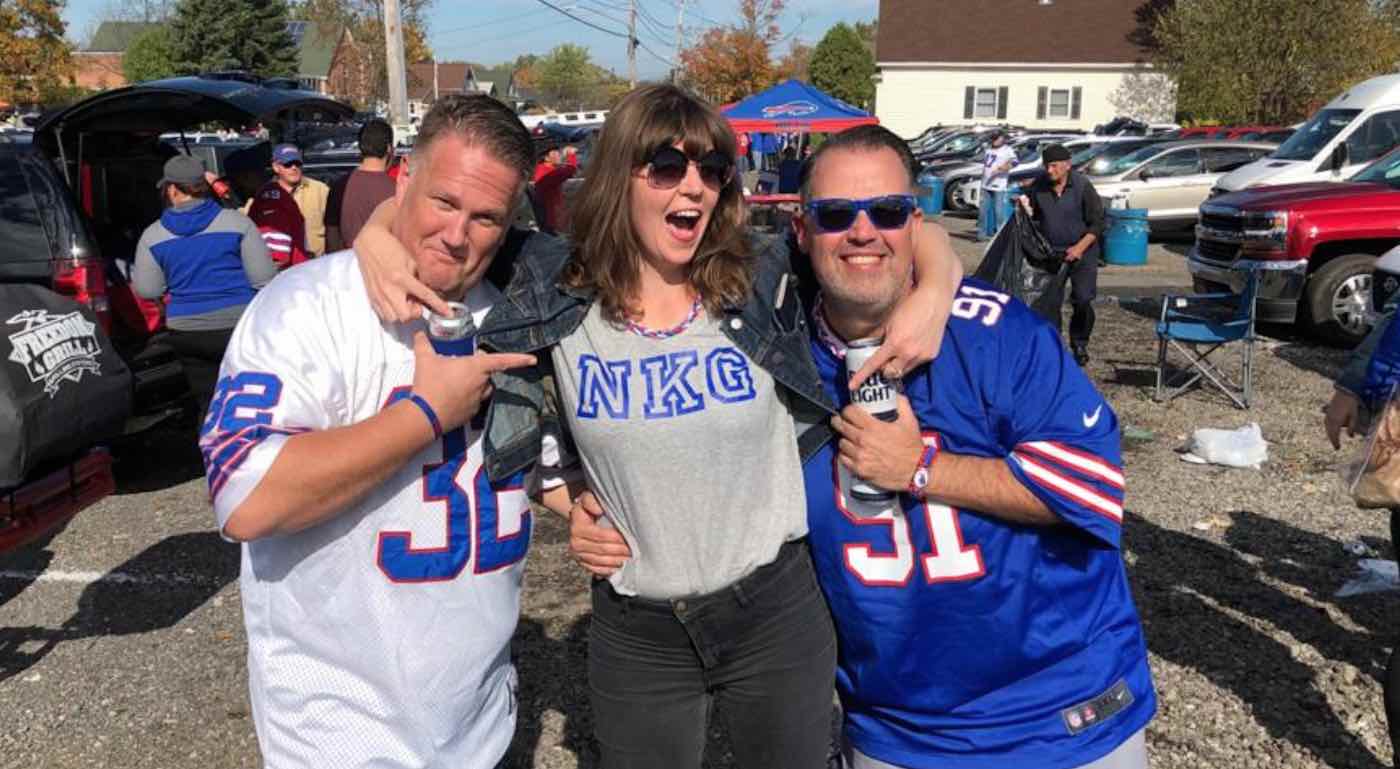 In September a young Dutch woman was arriving in the United States on business and purchased a SIM card so she could have a U.S. phone number to use for work. Unbeknownst to all, the new number wrangled her into a group chat with a bunch of guys who were Buffalo football fans—and she learned why the town in upstate New York is called “the city of Good Neighbors”.

Amanda Perino told GNN her fantastic story and we wanted to share exactly how things went down after she got the new phone number, and a group of guys just assumed she was a man:

“Almost immediately I found myself pulled into an ongoing group chat with 10 other numbers. At first I ignored it thinking it would eventually stop, but my phone continued to ping with messages.

It turns out I had chosen a number that someone had recently given up. This was a group of Buffalo Bills fans, and this was their fantasy football group chat.

Eventually I messaged the group: “Hey, not sure who you think this number belongs to, but I just signed up to this number myself so I think your friend lost it. 🙁 My bad!”

“If that’s true I feel bad for you” said one. “I’ve been trying to leave this for a year,” said another, etc, etc.

I asked again: “No chance of leaving me off this thread, huh?” The answer came: “It would probably be easier to change your number again.” 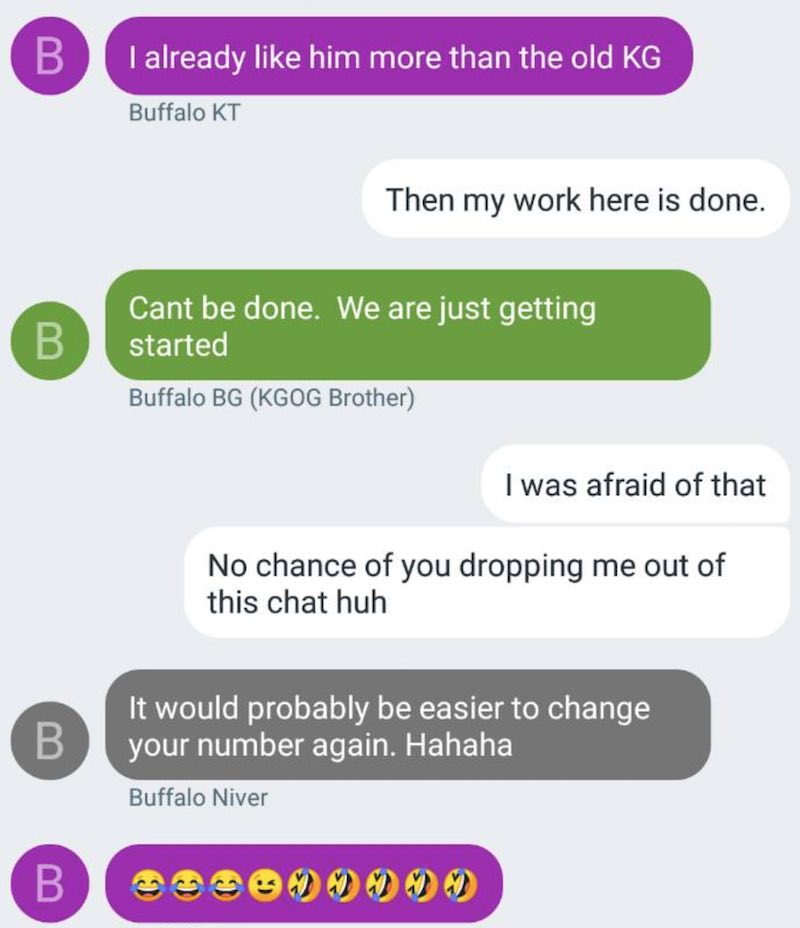 I gotta admit, at first I was annoyed. Because I rely on my phone for work, I checked every notification coming through, and 9 times out of 10 it was this group chat. I was ready to throw my phone against the wall.

But eventually I found myself looking forward to reading the texts and laughing at the chat. They were funny dudes. It became my entertainment that week while I was in the States for work.

I started to join in with a smart-ass comment here and there, and in no time I was chatting in the thread as if I knew them.

They referred to each other by nicknames or initials, so in order to follow the conversation better, I even saved their names in my phone under “Buffalo” so I could figure out who was who: Buffalo Sterner, Buffalo KT, Buffalo Niver, Buffalo BG, Buffalo Horse, Buffalo Sam, Buffalo Rymac. (Yes, I know, too much time on my hands.) My new number had previously belonged to one of the group named “KG”, so they started calling me “New KG” or “NKG” for short.

By this time, I didn’t want to let on that I was female, because I didn’t want them to throw me out of the chat. It was like looking into a secret bro window, and I was having fun. 🙊 But because I hadn’t blocked the chat, and was taking part in the conversation, they just assumed I was a guy. So I said nothing and never corrected them, and tried not to give them any reason to guess otherwise.

This was all in the lead up to the Bills home opener, so the chat was around the game and the upcoming tailgate.

“NKG you need to come to a game this year,” said one. “New KG better come to one tailgate this year or we’ll hunt him down,” said another.

“Buffalo Sterner” wrote: “I have two tickets NKG. You can have the second one. Free of charge…” 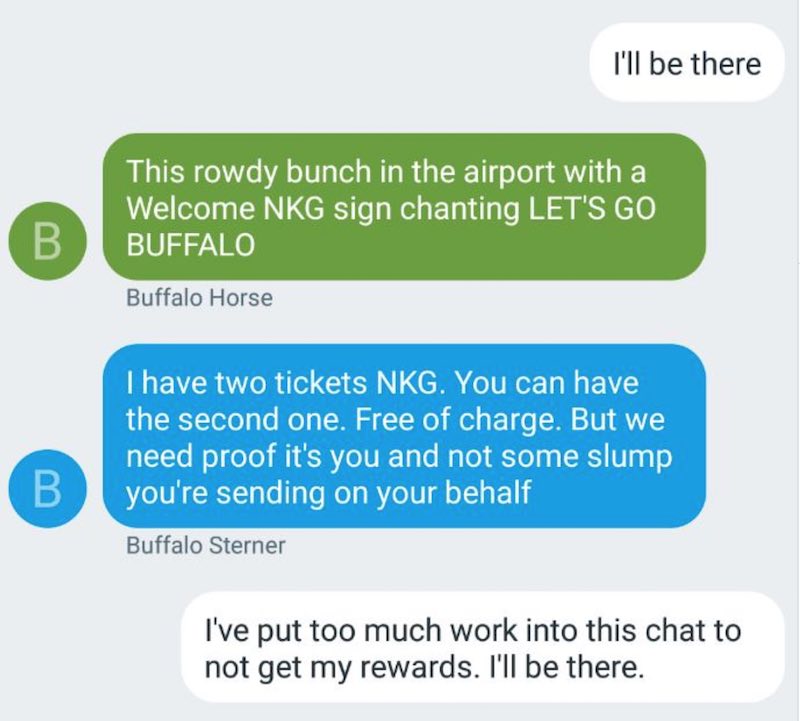 I already had to be in NYC in October for work. NYC to Buffalo was a mere 80 minute flight… 🤔

I mean…how could I not, right? I told them I’d be there, but I think they only half believed me.