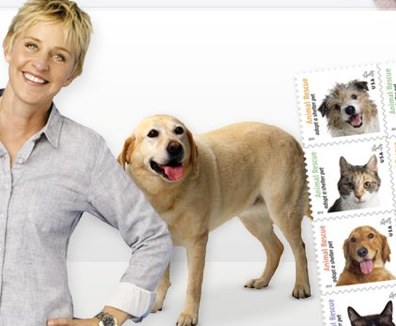 The Postal Service is working with DeGeneres and Halo, a holistic pet care company she co-owns, to promote the campaign and to bring greater attention to the cause of pet adoption.

DeGeneres and Halo are donating one million meals to shelter pets as part of the campaign. “By working together, we can find good homes for millions of adoptable, homeless and abandoned pets.”

“These stamps continue a Postal Service tradition of bringing attention to serious social issues of the day … one letter at a time,” said John E. Potter, the USPS chief. He hopes the campaign will increase public awareness about sheltered pets and encourage pet adoption.

The stamps go on sale April 30, and features a website you can utilize with a pet-finding tool that shows photos of specific animals available for adoption in your zip code.

Cats and dogs have been featured on other U.S. postage stamps. In 2002, photographs of a kitten and puppy were featured on the “Neuter or Spay” stamps.

Every year, 6 to 8 million cats and dogs enter animal shelters, and of that number, nearly half are euthanized. Although the problem seems overwhelming, the key to the solution is adopting a shelter pet when seeking a new companion and ensuring that the animal is spayed or neutered.

On April 30, DeGeneres will join Potter for the official stamp dedication ceremony at the Academy of Television Arts & Sciences in Hollywood, when the stamps will go on sale at post offices nationwide.