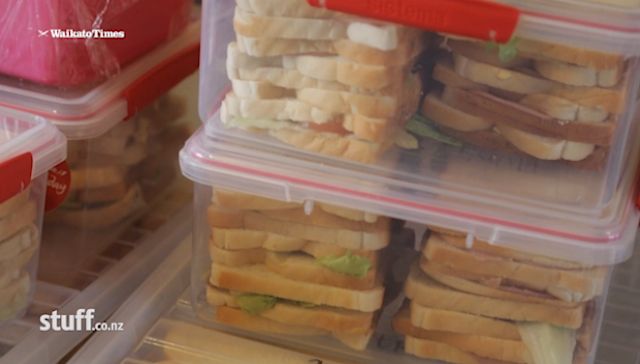 Every single day of the school year, gang members in New Zealand deliver hundreds of handmade sandwiches to schools in Waikato, making sure no children go hungry like they did when they were young.

In a Waikato Times video you can see Tribal Huk gang members huddled in their hair nets carefully spreading mustard and assembling the tomatoes and ham that will feed 450-500 children in 25 schools.

Letters from children that begin “Dear sandwich makers” line the wall, attesting to the gang’s more than two years of service.

When the video and story were published in the local paper and in a popular website, Stuff.co.nz, a flood of public support and offers have followed. People have volunteered to help grow the project, grow veggie gardens, send honey, avocados, margarine, eggs, books, money.

Tattooed gang members have been left speechless, including Jamie Pink their leader, “the angry man with a soft heart.”

“I wanna say thank you so much for the support. I’m not sayin’ we’re angels and that, but we’re not bad people. We didn’t expect this.”

Interviewed by the newspaper, Jamie Pink said he was fed by gang members when he was young and remembers them as generous people who looked after him and his mum when they had nothing.

Yes, he says, it should be the parents responsibility, but some kids just have “crappy parents.”

This is not recruitment, he says. ”If we thought like that, we’re not worth existing, to be honest with you.”

(WATCH the video or READ the story from Stuff.co.nz) – NOTE* The Video auto-plays if cursor is hovering over top.