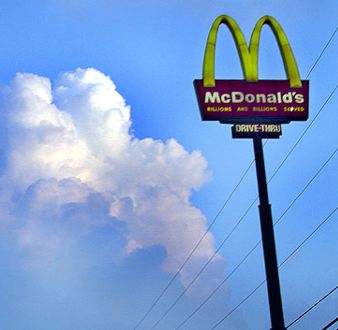 (GreenPeace News) In an historic deal that has impacts far beyond the golden arches, McDonald’s is now the leading company in the campaign to halt the deforestation of the Amazon for the benefit of soya farming. After feeling enormous consumer pressure from thousands of e-mails and letters sent to their European headquarters by environmental Activists, McDonald’s has agreed to stop selling chicken fed on soya grown in newly deforested areas of the Amazon rainforest…

In recent years, the seemingly unstoppable expansion of soya farming in the Amazon had become one of the main threats to the world’s largest rainforest. The soya wasn’t being used to feed the world; instead it was used to feed farm animals destined for fast food and supermarket chains across Europe.

In April GreenPeace launched a campaign exposing the food retailer’s role in rainforest destruction. The report, Eating Up the Amazon, detailed how McDonald’s and other companies were implicated in deforestation and land-grabbing. Since then there has been a sea change in attitude among the food industry towards the problem.

The result is that McDonald’s and other big food retailers have worked with environmentalists to develop a zero deforestation plan. The plan will also help bring an end to the land-grabbing and social injustice that is rife in the Amazon.

Karen Van Bergen, Vice President of McDonald’s Europe said, "When we were first alerted to this issue by Greenpeace, we immediately reached out to our suppliers, other NGOs and other companies to resolve this issue and take action. We are determined to do the right thing together with our suppliers and the Brazilian government, to protect the Amazon from further destruction."

By committing to the plan, the companies’ massive buying power has created a huge demand for soya that hasn’t been grown in the ashes of the rainforest. This put pressure on the ‘big five’ soya traders — Cargill, ADM, Bunge, Dreyfus and Amaggi to come to the negotiating table with the future of large areas of the Amazon rainforest at stake.

In response to the pressure, the soya traders committed to a limited two-year moratorium of buying soya from deforested areas. The two-year time frame of the soya traders’ moratorium risks being no more than a token gesture, unless the traders deliver real change to protect the Amazon.

Greenpeace is insisting the moratorium stay until proper procedures for legality and governance are in place and until there is an agreement with the Brazilian Government and key stakeholders on long term protection for the Amazon rainforest. A working group will be established, made up of soya traders, producers, NGOs, and government to put in place an action plan.

"The two-year time frame set for the initiative is, we hope, indicative of the sense of urgency with which the soya traders wish to implement the governance programme and all of its conditions. We expect that, should some of the measures take longer than the stated two years to implement, the moratorium would remain in existence until all commitments have been fulfilled."

There are some companies, however, who refuse to play ball. Kentucky Fried Chicken (KFC), has point-blank refused to discuss their role in Amazon destruction, and so we need to show them how isolated they’re becoming. E-mail the Colonel now and tell him that if Ronald McDonald can help protect the Amazon, so can he.

From press release by GreenPeace News