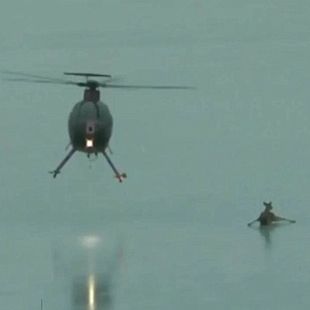 Longtime Good News Network viewers will not be overly-amazed by the dramatic helicopter rescue of a deer trapped on thin ice in the middle of a frozen Canadian harbor.

Ian Waugh spotted the doe and fawn struggling out on the ice and notified the Department of Natural Resources. He said the doe struggled for hours, trying to stand up on the slippery ice but she kept falling.

A few hours later, Waugh spotted a DNR helicopter near the mother and the alarmed fawn ran to shore as the chopper descended. He was amazed by what happened next and captured it on camera.

The solution described as “brilliant” in the CTV report was identical to the one used in two other ice rescues — in 2007 and in 2010 when an Oklahoma TV news chopper pilot saved a doe and a calf from icy peril three years apart.

(WATCH the latest video below)