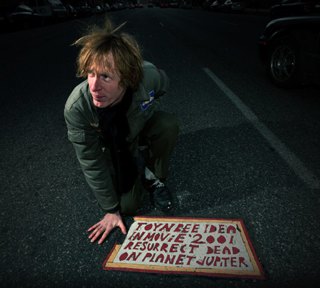 A house cleaning drop-out, Jon Foy, won the directorial award at the Sundance Film Festival for his homemade documentary, “Resurrect Dead: The Mystery of the Toynbee Tiles”.

During the 5 year odyssey of making his film, he learned how to write, shoot, and edit, mostly in the bedroom of a shared group house in West Philadelphia.

“A few weeks ago, I was just a housecleaner making my first film,” Foy said in his acceptance speech “So who knows what can happen in life? This [award] is for all the artists working in obscurity out there — never give up.”

The movie explores the mystery of hundreds of tile mosaics found embedded into the asphalt of city streets and sidewalks in both North and South America, beginning in the early 1980s. The cryptic message is always the same: “Toynbee Idea in Movie 2001. Resurrect Dead on Planet Jupiter”. Learn more about the tiles at Wired.com.

The film will be difficult to find until Jon Foy learns his next lesson —  how to get an award-winning documentary distributed.

WATCH Jon’s introduction to the film, via Sundance, below — Read the story of the filmmaker at NewsWorks.org