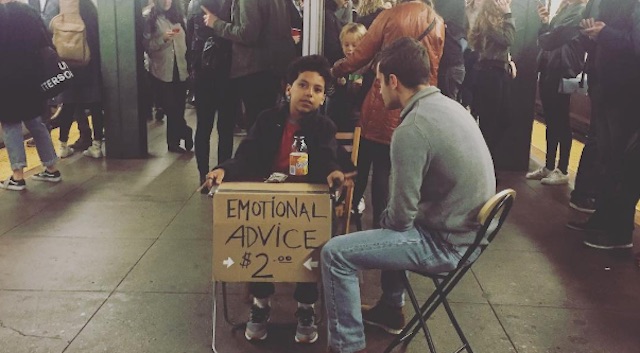 This boy and his therapist’s booth will remind you of the amateur psychology doled out in a Peanuts comic – except this compassionate kid isn’t keeping the money he earns; he gives it to children who can’t afford school lunches.

Each Sunday since October, Ciro Ortiz – also known as the Emotional Advice Kid – has set up his work station in the New York City subway to offer emotional advice at $2 per five minute session.

The 11-year-old first got the idea for his entrepreneurial adventure after he was bullied in school. Because he was raised by parents who encouraged him to be kind to others, Ciro funneled his feelings into helping his fellow New Yorkers with their life problems.

On a typical day, this young shrink can make up to $50, which he always funnels back into feeding his classmates at school.

After already chatting with dozens of worried city dwellers, he’s received an outpouring of appreciation and support. Ciro reportedly has a knack for addressing anxious adults with impressively simple responses. During one December afternoon, he was approached by a husband who was upset that his wife had become a vegan.

Ciro reportedly hears the most grief from his patients about how the times are changing and the world used to be so much better in the old days. His response? “Try to accept change. Everything changes. We have to change too.”