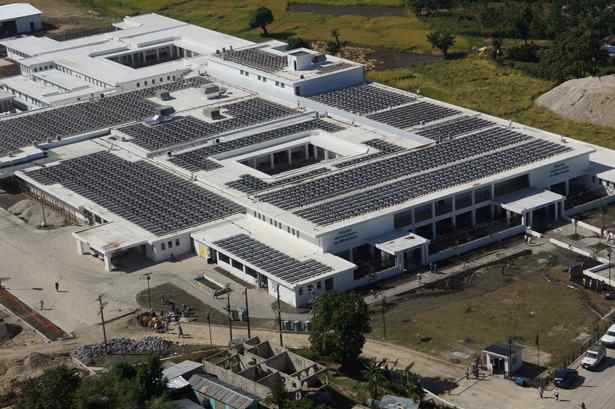 Over the past 25 years Partners In Health (PIH) has been working to bring the benefits of modern medical science to poor residents who need it most in mountainous Central Haiti. But here’s the problem: The electric power there is intermittent at best, with random outages for three or more hours every day.

By turning to renewable solar energy to solve these problems the new teaching hospital in Mirebalais, 30 miles north of Port-au-Prince, has landed itself in the forefront of health care innovation around the world. Stretched across the roof of the 200,000-square-foot University Hospital is a vast array of 1,800 solar panels — making it the largest solar-powered hospital in the world that produces more than 100 percent of its required energy every day, an impressive feat for a hospital in the middle of Haiti.

On a bright day, these panels are expected to produce more energy than the hospital will consume. Before the facility even opened its doors in March the system churned out 139 megawatt hours of electricity, enough to offset 72 tons of coal.

Many countries, like Haiti, have been ravaged by deforestation, so the ecological benefits of alternative energy cannot be overstated: Annually, the system is expected to save 210 metric tons of carbon emissions.

Perhaps most important is that the excess electricity will be fed back into Haiti’s national grid, giving a much-needed boost to the country’s woefully inadequate energy infrastructure.

This push toward sustainability and energy self-sufficiency translates into significant financial savings too. In Haiti, electricity is expensive: The price per kilowatt hour is 35 cents, compared with 5.5 cents in New England. Using solar is expected to slash $379,000 from the hospital’s projected annual operating costs.

Solar power is just one part of a comprehensive environmental strategy. Other green-friendly features at the hospital include natural ventilation that minimizes the need for air conditioning and motion-sensor activated lights that cut energy consumption by 60 percent when compared with traditional lighting. 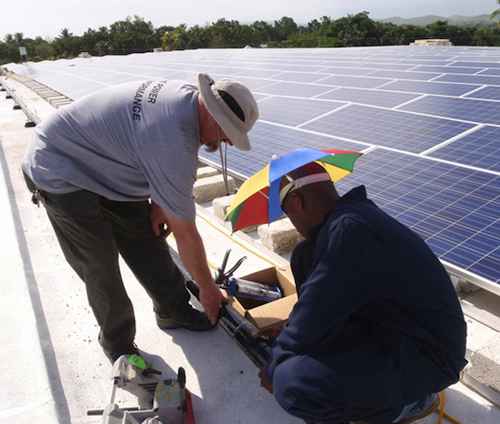 PIH is no stranger to solar energy. In 2007, they brought solar-energy systems to clinics in Rwanda, Malawi, Lesotho and Haiti, but scaling the technology to deliver reliable power for a 300-bed hospital demanded elegant design and extensive collaboration.

“At each step of the way, we were attempting things that had never before been done in Haiti,” said Jim Ansara, University Hospital’s director of design and construction.

Six local electricians were trained in how to install and maintain the system. Overall, it’s estimated the hospital will create more than 800 new jobs for Haitians.

If you want to support the work of Partners In Health, which has changed the face of rural health care in Africa, Peru, Russia and for native-Americans in the US, visit PIH.org