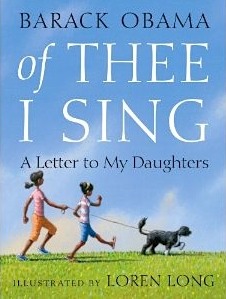 To fulfill a 3-book contract for his publisher before taking office in January 2009, President Barack Obama finished writing a children’s book, an illustrated tribute to 13 American leaders.

Unveiled this week, Of Thee I Sing: A Letter to My Daughters, has already rocketed into the top of the Amazon.com charts, two months before its scheduled release.

With a whimsical cover featuring his two girls walking Bo, the family dog, proceeds from the thin tome are to go to a scholarship fund for the children of soldiers killed and disabled in wars.