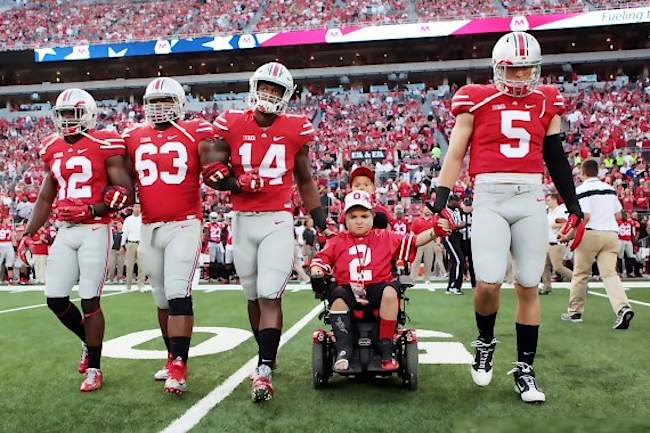 Two brothers with Duchenne muscular dystrophy have formed a special relationship with the Ohio State Buckeyes football team, one that resembles a loving family.

Jacob Jarvis, 14, and his younger brother Noah Studebaker, 7, each have the disease, the most common fatal childhood genetic disorder.

The siblings have been friends of the Ohio State coach, Urban Meyer, and the team, since July 2013, and regularly attend practices and sit in on coaching meetings.

“Our players love them,” said the coach whose team has given the game ball to the boys after big victories.

Check out: Softball Team Could Have Won 50-0, But Chose to Forfeit and Teach Opponents how to Improve

Describing their first encounter, Meyer said, “I saw an incredible spirit,” reports the Columbus Dispatch. “His eyes were just glistening, being in the stadium, on the field.”

The team members agree that they have benefited far more than the kids have, learning lessons of gratitude and always having a good attitude.

(WATCH the video below from Big Ten Network, The Journey – on Facebook)