Home All News World Penguin Always Returns From the Sea to Visit Man Who Saved Its... 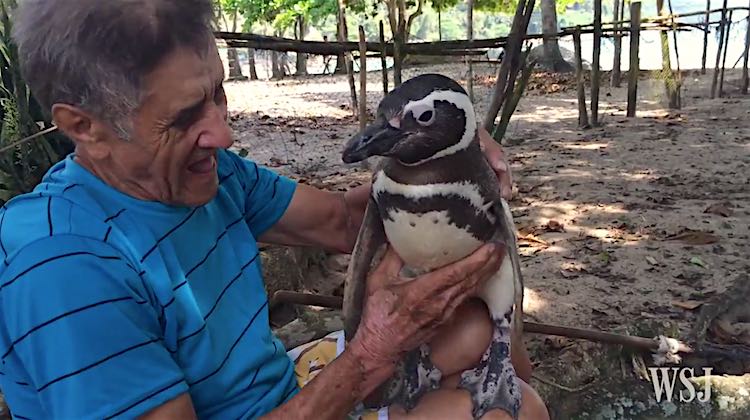 A retired bricklayer’s act of kindness four years ago has won him a penguin friend for life.

When João Pereira de Souza found an oil-soaked bird on the beach near his southeast Brazilian home in 2011, he cleaned off the penguin, fed him some sardines, and when it was strong enough, took the bird to the beach, expecting it to swim away.

But the black and white Magellanic penguin, now known as Jingjing, refused to leave.

De Souza even took him out in a boat, far from land and turned him loose in the ocean. When he got home, Jingjing was already waiting for him.

Magellanics are known to migrate thousands of miles between breeding grounds in Patagonia and feeding grounds farther north, but Jingjing seems to have adopted the warmer climate of Rio de Janeiro, where de Souza lives on the beach.

Jingjing will head out to sea for days, or even months, at a time, but he always returns. The penguin spends roughly eight months every year with de Souza in Brazil.

Help This Story Migrate To Your Friends, Share It…