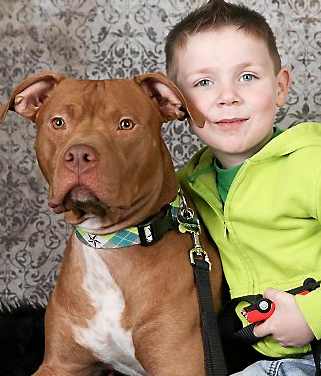 Christi Smith saved a pit bull pup from certain death at the hands of Animal Control. Four days later, the dog repaid her by saving her son’s life.

The rambunctious dog was hours away from being euthanized, but Christi had her doubts about adopting this untrained 9-month-old mixed breed. She ultimately decided to foster the dog, changed his name from “Gator”, and tried to housebreak it while finding someone else to adopt it. Her misgivings completely evaporated on the fourth day.

“I put my son to bed at about 8:30 in the evening,” Smith says. “He woke up between 12 and 1:30 to ask for something to drink. He was acting weird — really out of it. I chalked it up to being deliriously tired. I wasn’t too concerned.”

”After putting Peyton back to bed, not even 20 minutes later, TatorTot began running back and forth from Peyton to me,” Smith says. “He was barking and acting like something was wrong. He didn’t let up.”

“Finally, I went to check on my son. He was barely breathing.”

In the ambulance it was discovered that the four-year-old had super low glucose levels. “They thought he could be diabetic.”

Although TatorTot is just a puppy, he may have shown his natural instinct to be a diabetic-alert dog.