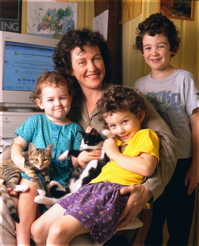 Given so much bad press about teens beating each other up, getting pregnant at 15 and going to rehab, or the fears that small kids are being poisoned from toys in China, mothers need some good news on Mother’s Day! Here are 7 reasons to be RELIEVED if you are a parent in 2008. These positive trends should calm your worries, and give you seven reasons to be happy on Mother’s Day.

1) Domestic Violence has Plummeted to a 30-year low. Domestic violence against spouses and intimate partners in the U.S. fell by nearly two-thirds in recent years, reaching a 30-year low. Government figures show the marked declines began in 1994.

2) What Makes Teens Happy? Family Ties. “Spending time with family,” was the top answer to what makes teens happy, according to an extensive survey of people ages 13-24 conducted by The Associated Press and MTV on the nature of happiness among America’s young people.

3) Teen Pregnancy Rates are way Down. Since 1991, U.S. teenage pregnancy, abortion, and birth rates have all declined steadily in every age, racial and ethnic group, and in every state. And, they’re having less sex than their peers did 15 years ago.

5) Less Smoking, Alcohol, and Drug Use for Today’s Teens – Teen drug use has declined by 23 percent since 2001, with reductions in the use of nearly every drug, including alcohol and cigarettes — approximately 840,000 fewer youth using illicit drugs in 2006 than in 2001. High school students who had smoked one cigarette in their lifetime dropped to 54 percent, compared with 70 percent in 1991. The number of teens who had at least one alcoholic drink dropped from 81 percent in 1991 to 74 percent last year.

6) The number of moms breastfeeding is the highest it’s been in 20 years – Gving more health benefits to the child, a closer bond for the mother, and hundreds of dollars in grocery savings for families on tight budgets, the Centers for Disease Control noted that breast feeding also conveyed health benefits to women, including decreased risk for the most common form of diabetes, ovarian cancer and breast cancer.

7) The Divorce Rate has hit a 37-Year Low. America’s per capita divorce rate has declined steadily since its peak in 1981, dropping by one-third to its lowest level since 1970.

Knowing these 7 positive trends, mothers can throw away their worries and enjoy a hopeful Mother’s Day in 2008.

Geri Weis-Corbley is the founder and managing editor of the Good News Network, in its 11th year providing positive news from around the world at https://www.goodnewsnetwork.org – #1 on Google, the Good News Network, offers fresh inspiring news and videos every day, and is giving away prizes and free gifts on Mother’s Day and throughout the month of May. Join the Good News Network as a charter member or sign up for the free newsletter, Top 10 Good News of the Week. (To share this story with mom or sister or daughter, use the PDF or print icons next to the headline at the top of the page.)