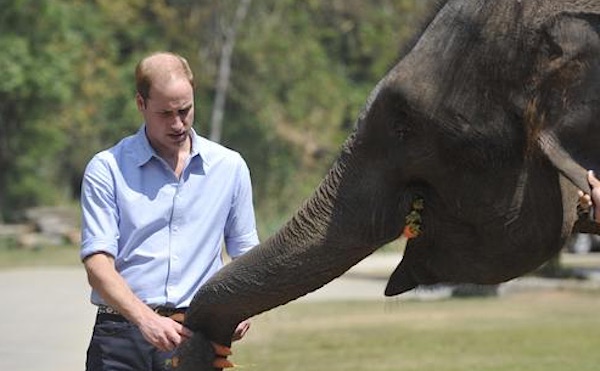 Ending the demand for products made from elephant ivory, rhino tusks, and shark fins is the first step to eradicating poaching–and recent efforts to do that on a government level in China and has made a huge difference.

Meanwhile, there is another line of defense against poaching and it is one Prince William has been working on for a year. As president of the United for Wildlife charity, he has produced a declaration that aims to shut down the transportation routes exploited by traffickers of illegal wildlife moving their products.

CHECK OUT: With Fins Off the Menu, A Glimmer of Hope for Sharks

This week at Buckingham Palace, leaders from the transport industry—airlines, ports, shipping firms and customs operators—agreed to 11 commitments that could collectively lead to curtailing wildlife trafficking.

Prince William spoke to leaders from 40 companies who signed on to the Wildlife Transport Taskforce, including  Emirates Airline, Qatar Airways, World Wildlife Fund, the World Customs Organisation and industry bodies such as the International Air Transport.

“We have faced up to the fact that if current trends continue, the last wild African elephants and rhinos will be killed before my daughter Charlotte reaches her 25th birthday,” he said.

“Everyone agrees that losing these animals from the wild would be a disaster for humanity. This means that halting this crisis is only a test of our will.”

“By signing this declaration, you, the leaders of some of the most important transportation companies and agencies on earth are answering with an emphatic, ‘yes’.”

“By implementing these commitments the signatories can secure a game changer in the race against extinction. I thank them for their commitment and I invite any other company in the industry to sign up to the Buckingham Palace declaration and play their part in the fight against the poaching crisis.”

United for Wildlife is an alliance between seven of the world’s most influential conservation organizations and The Royal Foundation of the Duke and Duchess of Cambridge and Prince Harry. Share the Good News…

Rhino Horns Get Pink Dye Injection to Ward off Poachers