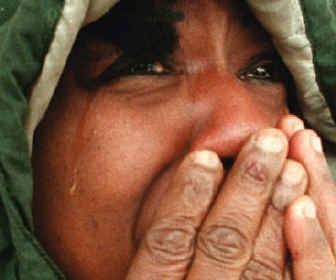 The Secret Santa from Kansas City has long brightened the hearts of hundreds each holiday season by handing out hundred-dollar bills to strangers on city streets. Now, after 26 years and $1.3 million of anonymous holiday giving, he has decided to reveal his identity. He is weak from cancer and chemotherapy but Larry Stewart, a 58-year-old businessman from Lee’s Summit, Missouri, is determined to pass on his belief in random kindness…

A big guy with a beard wandered the streets of New York handing out cash at Christmas. The man, wearing a red Santa hat, handed out $100 notes to dozens of people at random over three days. He distributed a total of $25,000 before flying home to Kansas City, MO. He says he has done this every Christmas for 22 years.

The anonymous businessman told the Kansas City Star that he was once destitute when the owner of a Mississippi diner handed him a $20 bill and said, “Son, you must have dropped this.”

“That fella just knew I was in trouble and helped me in a way that didn’t embarrass me,” recalled the Samaritan Santa.

Santa also gave money to fire stations, churches and charities. He also dropped $100 into the bucket of a dumbfounded Salvation Army worker, said, ‘Merry Christmas,’ and kept going.
Now, read the full AP story about him in 2006 — how his giving nature was born around Christmas time after he’d lost his job, and why he wanted to reveal himself — and check out the photo gallery at KansasCity.com featuring the faces of his those he’s blessed. The photo used in this story is a wonderful example of the collection there and used to illustrate their tribute.

Larry started a Secret Santa Facebook Page, and has a tribute there about one of the sweetest men to live in this century, Buck O’Neil, of Negro League baseball fame, and also one of Secret Santa’s helpers on his many rounds…