Home All News World She’s Officially Celestial: Malala Gets Astroid Named After Her 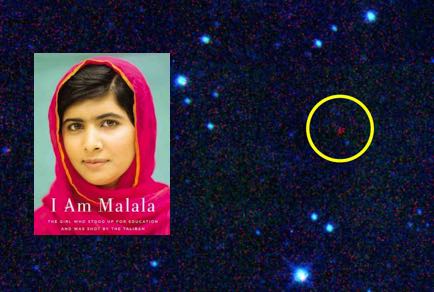 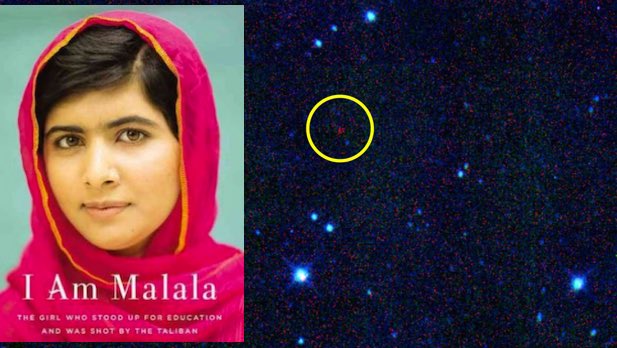 She fought for girls’ rights, survived an assassination attempt, and won the Nobel Peace Prize all by the time she was 17 years old. Now Malala Yousafzai has a celestial body named after her.

An astronomer at NASA’s Jet Propulsion Laboratory discovered the asteroid back in 2010 and the International Astronomical Union Committee on Small Bodies Nomenclature announced last week it is now named after the Pakistani teenager who stood up to the Taliban.

Yousafzai became the youngest person to ever receive the Nobel Peace Prize last year for her activism in support of a girl’s right to attend school. In 2012, Taliban gunmen shot her, leaving her severely wounded in a failed assassination attempt. She’d drawn the Taliban’s ire after becoming an outspoken critic and symbol of resistance to Taliban efforts to quash education for girls in Pakistan.

“If anyone deserves to have an asteroid named after them, she does,” said Amy Mainzer, who discovered the asteroid. She wrote on the Malala Fund blog, “We desperately need the brainpower of all smart people to solve some of humanity’s most difficult problems, and we can’t afford to reject half the population’s.”

Asteroid 316201 Malala lies between the orbits of Mars and Jupiter, in our solar system’s main asteroid belt. Four kilometers across and described as the color of “printer toner,” it takes five-and-a-half years to orbit the sun.

Mainzer said she decided to name her discovery after post doctoral student Carrie Nugent pointed out to her how few asteroids have been named “in honor of the contributions of women and particularly women of color.”