Home All News Inspiring Mom With Cancer Brought to Tears By Son Traveling 1,500 Miles to... 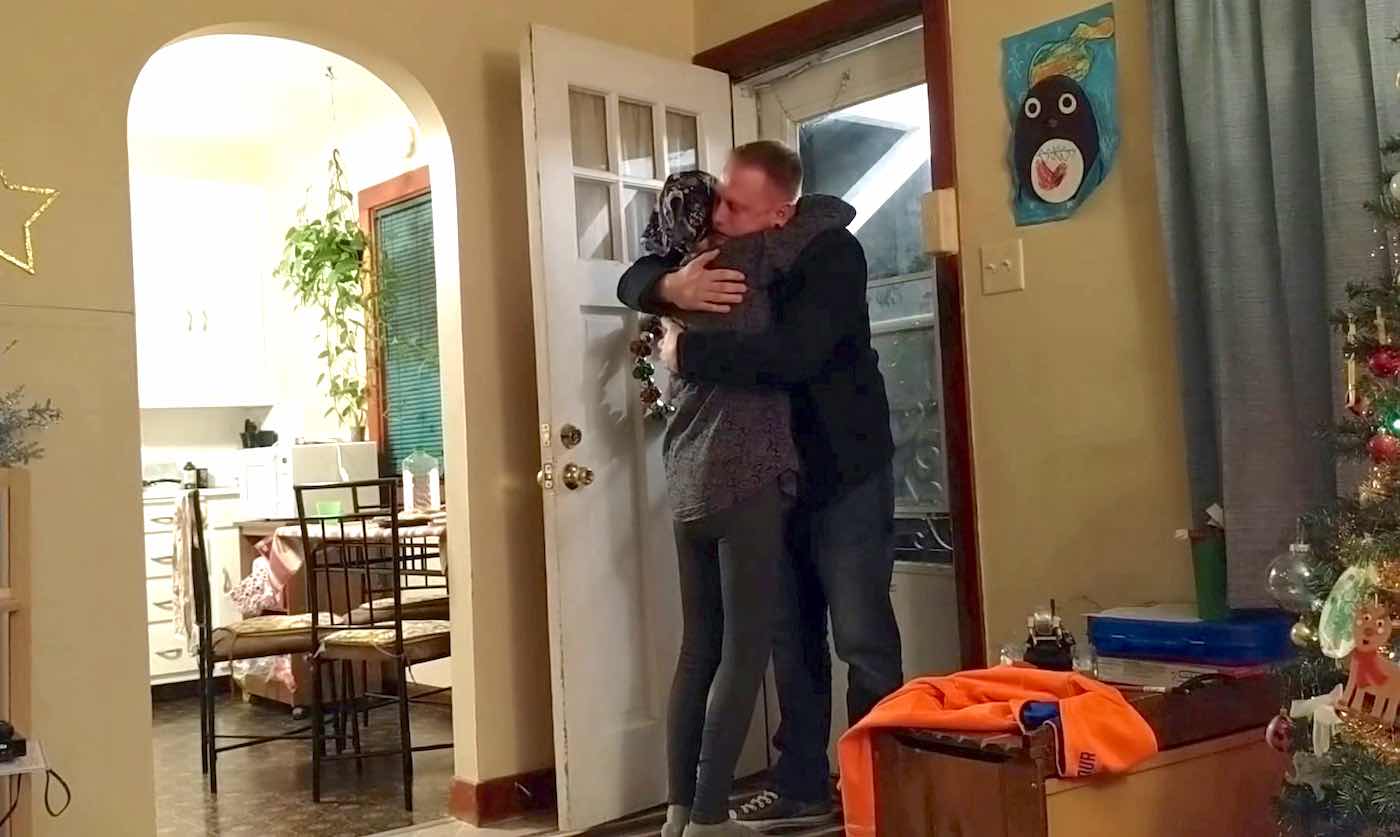 This is the moment that a mom suffering from lung cancer was given the gift of a lifetime: her son arriving home just in time to surprise her on Christmas Eve.

6o-year-old Debora Hendry was diagnosed with lung cancer after doctors found a tumor the size of an egg on her lung. As the mother-of-six underwent chemotherapy and radiation therapy, she prepared for what she feared might be her last Christmas with her family in December 2018.

That being said, the mother-of-six was still saddened by the one person who was missing from her dinner table.

32-year-old Jacob Hendry is the only one of Debora’s children who has moved away from home. Since he began studying mechanical engineering 1,500 miles away in California five years ago, the expensive distance has meant that it has been rare for the student to fly home.

His entire family—including his parents, his 5 sisters and 15 nieces and nephews—have stayed living in Fremont, Nebraska.

“Moving away from home was incredibly difficult for me. Friends, family—everything I’ve ever known was back in Nebraska,” said Jacob. “I’ve been in California for 5 years now, and I think I’ve made it back for two Christmases. Being a full-time student, it’s hard to come up with the money for flights.”

Unbeknownst to Debora, however, Jacob pulled out all the stops, saving up and borrowing money from friends so he could fly home and surprise her on Christmas Eve last year.

Jacob’s sister Becky filmed the special moment that Debora opened the door on December 24th and saw her son for the first time since her diagnosis.

The heartwarming clip shows Debora overcome with emotion as she embraces her son and declares it “the best Christmas ever”.

“When we received the diagnosis, it hit me hard. Being so far away from all your loved ones during a time like this was almost unbearable,” says Jacob. “I thought about leaving school and moving back home, but I knew that my mother wanted me to continue my education.

“I hadn’t been home in so long… I think it had been a year since I saw her last. It was very difficult to come home for the holidays since we simply didn’t have the money,” he recalled. “I didn’t think I would be able to make it, until I was able to borrow the money at the last minute. I purchased a ticket and decided to surprise my mom by showing up on Christmas Eve.

“This opportunity to spend Christmas with her and the rest of my family meant the world to me—to all of us.”

Four years after he moved away, Jacob’s mum Debora received a diagnosis of small cell lung cancer in September 2018. The diagnosis was devastating for the family, especially since they didn’t have much money and Debora did not have health insurance.

Luckily for the Hendry family, Debora lives close to the world-renowned University of Nebraska Medical Centre where they have reportedly been treating the mother for free.

“They found a tumor on her lung the size of an egg and immediately placed her on concurrent chemotherapy and targeted radiation therapy. It was the most aggressive therapy possible,” says Jacob. “We’re all incredibly grateful for their work. It’s the only reason she’s alive today.”

Jacob’s surprise visit home for Christmas last year meant that Debora was surrounded by her family for a holiday full of joy and laughter before Jacob returned to California.

Before you reach for the tissues, this story has a happy ending; Debora continued to fight the cancer until—incredibly—she received the amazing news that she was in remission earlier this year in January.

Now cancer-free, the grateful grandmother is planning for another wonderful Christmas to celebrate with her family—and Jacob was even able to book a flight home as well.

“She has been monitored regularly to this day and still shows no signs of cancer!” says Jacob. “I haven’t seen my family since our reunion at Christmas last year, and I can’t wait to fly home to see everyone.”