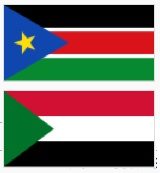 The leaders of Sudan and South Sudan signed deals on Thursday to secure their shared border and boost trade, including a restart of crucial oil exports. The deal, reached after more than three weeks of negotiations, will throw both ailing economies a lifeline and prevent, for now, a resumption of the fighting that broke out along the border in April and nearly led to all-out war.

The presidents of Sudan and South Sudan signed the trade deals to applause at a packed room in a five-star hotel in Addis Ababa, the seat of the African Union, which has been brokering the talks.