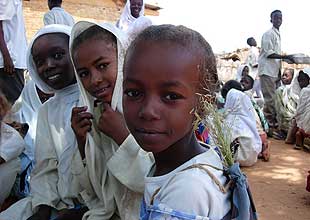 The number of students enrolled in school in southern Sudan has more than doubled since the end of the long-running civil war two years ago, according to the United Nations Children’s Fund, which is backing a local campaign to provide hundreds of new or renovated classrooms and millions of schoolbooks, pencils and other materials to encourage better enrollment rates.

About 850,000 children are now enrolled in southern Sudan, UNICEF reported yesterday, up from an estimated 343,000 during the war, which ended with the signing of a comprehensive peace deal in January 2005. Some 34 percent of the enrolled children are girls, considered a milestone given some traditional beliefs about education for girls.

Much of the increase has occurred only in the last year, since the Government of Southern Sudan’s education, science and technology ministry launched its “Go To School” initiative, supported by UNICEF.

More than 2,500 teachers were trained in English and teaching methods and another 5,000 are slated to receive training this year. Millions of schoolbags, books, pencils and other learning materials have been delivered to schools, using trucks or sometimes river barges or helicopters to reach the more remote locations.

The plan, which aims to send 1.6 million children to school by the end of this year, was created after local leaders identified education as the key to reconstruction in the wake of the north-south war, which lasted for 21 years. (A separate conflict is ongoing in the Darfur region in the country’s west.) More than 80 percent of the 2,922 schools operating in the region had deteriorated or been destroyed.

UNICEF is appealing for $30 million more for the education initiative to train teachers, erect 200 more permanent schools, and provide learning materials to help pupils to stay in the classroom and obtain a full education.

The initiative has been funded by Japan, Denmark, the Netherlands, the United States, German and Swiss national committees and funds for UNICEF among others. You can help by contributing to UNICEF.