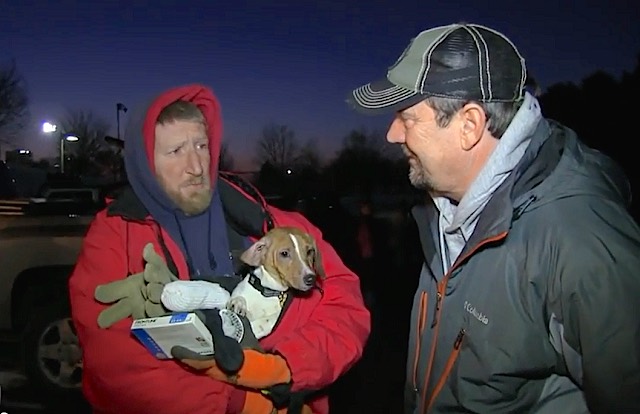 It all started with one good deed that led to an even bigger one, which resulted in a life-changing one, all in the name of helping homeless people with pets, who aren’t allowed in shelters because of their animal companions.

Break.com, an online site that showcases funny videos, planned to surprise the Louisville pet hero Beth Green. She has been giving dog food and blankets to these human-pup families throughout the sub-zero winter. While preparing to donate a year’s supply of dog food to the Kentucky do-gooder, the video team heard a heart-breaking tale and decided to go big on their “prank”, just in time for April Fools Day.

While the show’s host Tom Mabe, was collecting footage of Beth’s volunteer organization, My Dog Eats First, he was introduced to a homeless man named Ricky who sacrifices everything for his 12-year-old dog Buddy. “I’ll do without”, said Ricky. “I’ll feed him before I feed myself.” 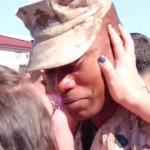 Not the Usual Homecoming Video: Wife Surprises Returning US marine

Ricky and Buddy had been living together for years in a car, but were forced to separate once Ricky was hospitalized for cancer. After hearing he only had six months to live — and against the recommendations of the hospital staff — Ricky discharged himself to live again with Buddy on the streets.

Beth’s group did her best to keep the pair in a pet-friendly motel, but the money ran out.

After hearing the sad story, Mabe pulled some strings and with his video crew recording it all, brought Ricky to an apartment and announced that the newly-furnished place was to be his — a warm home for the companions to rest during their final chapter.

Tom Mabe learned something during this latest prank, too.

“I used to get really upset when I would see a homeless person with a dog. I would think, ‘You can’t take care of yourself, how are you going to take care of a dog?'” he said. “But after spending a lot of time with them I realize they take great care of the dogs and it gives them something to be accountable for…it really gives a homeless person purpose.”

“We are keeping in touch with Ricky,” Mabe told the Good News Network, “and he has a tough road ahead of him, but he and Buddy are in a comfortable environment now.”