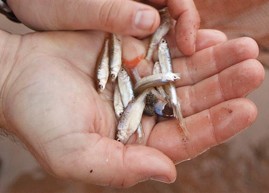 Wildlife biologists have evacuated two species of minnows from the shrinking waters of a West Texas river in the first of several rescue operations involving fish affected by the state’s worst drought in decades.

Smalleye shiners and sharpnose shiners, the species collected Thursday from the Brazos River about 175 miles northwest of Fort Worth, were taken to the state’s fish hatchery near Possum Kingdom Lake. When drought conditions abate, the minnows will be returned to the river.

(READ the story at MSNBC)