Living on dusty roads has provided Scott Wade the perfect canvas for creating a new form of art. Wade uses his fingers — as well as traditional tools like brushes — to create his inspired dust art. He even uses popsicle sticks to shift the dirt into plains of inspiration. (photo) Ode to Van Gogh’s ‘Starry Night’ and Da Vinci’s ‘Mona Lisa’...

Wade’s work appeared in the Austin American- Statesman, including this photo of his recreation of C.M. Coolidge’s A Friend in Need (a.k.a. dogs playing poker). 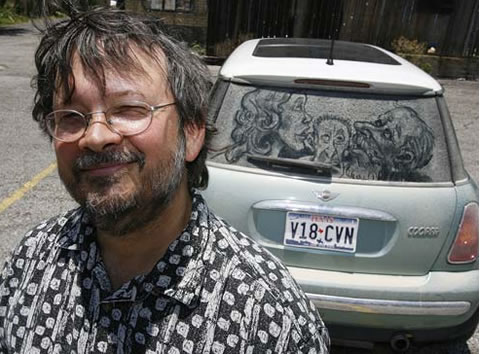 (right) Scott, from San Marcos, Texas, with his Mini Cooper

See a full set of Wade’s photos on Autoblog