Home All News Kids When a Cheerleader with Down Syndrome was Bullied, 3 Players Walked Off... 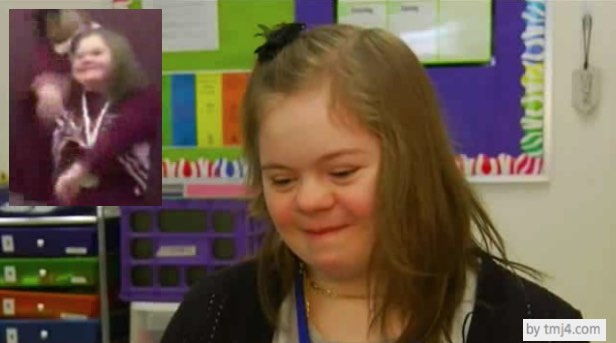 A cheerleader with Down syndrome being bullied at a Lincoln Middle School basketball game in Kenosha, Wisconsin spurred three of the basketball players to walk off the field in her defense.

Desiree Andrews moves to her own internal rhythms while cheering on the sidelines. After someone in the stands began criticizing her, some eighth grade players, Miles Rodriguez, Chase Vazquez and Scooter Terrien stepped in to stop it.

“A couple of us went over there and were like, can you guys just stop, that’s not right,” Miles Rodriguez, told WTMJ-4 News.

In honor of Dee’s enthusiasm and sweet smile, the school’s athletic director said he was going to hang a banner that proclaims the school’s gym to be “D’s House” — a nicknamed that has stuck over the past year.

A community business owner saw the story in a newscast and said they would donate the banner.

(WATCH the video above or READ the story, w/ photos, from Kenosha News)