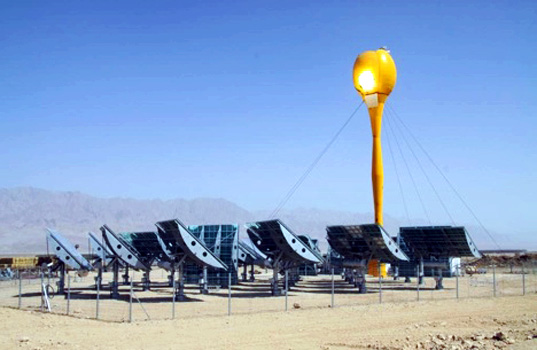 Who says a power plant can’t be pretty?

This 100-foot-tall structure in the shape of a tulip can deliver clean, sustainably-produced energy, even at night, because it is the world’s first hybrid solar power generator.

Designed by Israeli architect Haim Dotan and Aora Solar, the solar turbine can power 60-80 homes at a time, combining sculpture, architecture, and infrastructure to create a magnificently efficient—and appealing—power source.

Currently, the “solar tulip” stands as an artistic beacon of power in Samar, Israel and Almeria, Spain, where a bloom at the top of the tower captures sunlight from a series of mirror reflectors. After the sun goes down, the solar generator is powered by diesel, biogas, and natural gas. Plans are also underway to construct a solar-tulip facility near Arizona State University in Tempe.

Dotan explained his design saying he fashioned the turbine as a flower “to create emotions, excitement and awareness of the destruction of natural resources.” 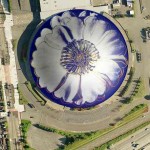 The solar tulip’s ability to work as a stand-alone plant is an advantage in countries without developed utility grids, which is why solar tulips will also soon be sprouting up in Ethiopia, according to the Ministry of Water, Irrigation, and Energy.

How does it work?

From the centerpiece in the tulip flower, super-heated air travels down and turns a turbine blade, generating 100 kilowatts of electricity and 170 kilowatts of heat energy.

The system’s low water consumption – the tulip powers the micro turbine with heated air instead of steam – is especially appealing in the desert Southwest, which has led to the partnership between Aora-Solar, Arizona State University and GreenFuel Technologies. 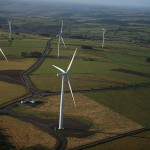 It’s also a modular system, which means it can expand to meet the energy needs of a growing community–just like planting more bulbs leads to bigger garden.

Help This Idea Blossom… (Pass it on.)