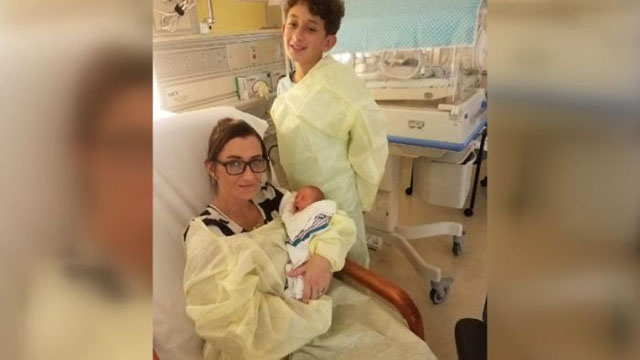 Childbirth can be stressful for everyone, especially for a boy who is only 10 years old.

But that didn’t stop Jayden Fontenot from helping to deliver his newborn baby brother and save his life.

Jayden’s mother, Ashley Moreau, was at their home in Sulphur, Louisiana earlier this month when she went to use the bathroom and her water suddenly broke – over one month earlier than when she was originally scheduled to give birth.

Moreau was also horrified to see that not only was she bleeding profusely from a torn uterine lining, but her baby’s feet were also poking out, leaving it in the “breech” position: a condition that can increase the risk of birth complications.

She called her son into the room and asked him to fetch his grandmother from next door.

Unfortunately, the senior had just undergone a back surgery, making her too weak to walk over to their house. As Jayden ran back to help his mother, his grandmother called 911.

“I said (to Jayden), ‘You’re going to have to deliver your brother, and we have to do it fast because the baby’s feet are turning blue and he can’t breathe,’” Moreau told TODAY. “He said, ‘Tell me what I need to do and I’ll do it.’‘

After rotating the infant into a safer delivery position at his mother’s instruction, Jayden managed to help his mother through the birthing process. But once the delivery was finished, Jayden realized that his brother was not breathing.

He then ran to the kitchen and grabbed a nasal aspirator that he had seen his mother use on his 1-year-old sister Remi. By the time emergency paramedics arrived at the scene, Jayden had already used the device to restore his brother’s breathing.

Newborn baby Daxx has been recovering at the Lake Charles Memorial Hospital, but he is expected to be sent home in the coming week.

“Every time I think about it, I just cry,” said Moreau. “I don’t think Jayden understands what he’s done and how big it is.”