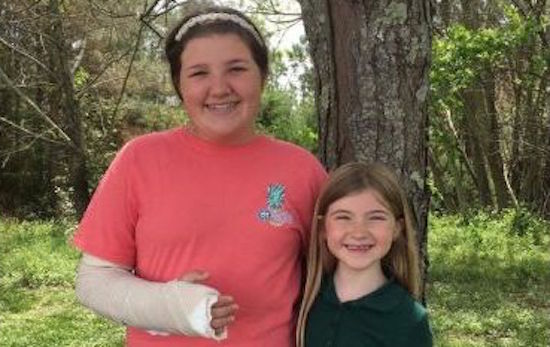 A 12-year-old girl may not seem like much of a match for an adult carjacker – but that wasn’t the case for Maddie Weiler.

Maddie and her 7-year-old sister Molly were on the way to the Busch Gardens theme park in Virginia on Saturday when they witnessed a car accident happen right in front of their eyes.

Maddie’s mother Brandie Weiler pulled over and got out of the car in order to help the victims. After she dialed 911, however, she saw the man who caused the accident unlock the door to her car and climb into the driver’s seat.

RELATED: Teens Are Instant Heroes For Saving a Boy Who Fell Off a Cliff

Maddie sprung into action by putting the van into drive, knowing full well that it prevented the car from starting. She then started punching Salsman as hard as she could and screaming at the top of her lungs – all to give her sister Molly enough time to get out of the car and away from the danger.

Salsman reportedly tried to steal two more cars before being arrested by police. He is currently being charged with three counts of felony carjacking, felony hit and run, and driving under the influence of drugs.

According to Fox News, Maddie is an talented horseback rider. After the incident, she told her mother: “Mama, if I can control a 1,500-pound animal, then I was sure going to try to take care of him.”

Maddie’s parents have always told the kids to resist kidnapping by lashing out and making as much noise and possible. Though she suffered a fractured growth plate in her wrist, the young hero believes that it’s a small price to pay for the safety of her family – and she encourages other girls to follow her example.

“I just went for it,” Maddie told WTKR. “Nothing passed my mind except, ‘He is a psycho and he needs to get out of the car’.”