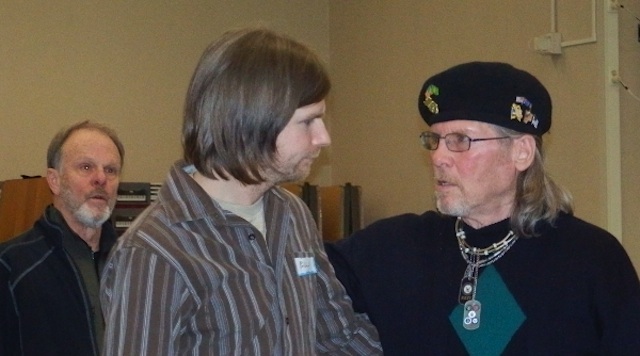 Milwaukee theater professionals have been working with local veterans through intensive weekend workshops that allow emotions to boil from the cauldron of conflict within, using the words Shakespeare.

The Feast of Crispian program, run out of the Milwaukee’s Veterans Affairs hospital, has been such a success that last week it received a $50,000 grant from the Helen Bader Foundation to launch an all-veteran, fully-staged production of Julius Caesar.

In the hospital’s community room, professional actors stand next to the veterans to help them act out the dramatic scenes. They feed them the lines and story plot points, freeing them to concentrate on the emotions without having to memorize or hold a script. The process helps the veterans to strengthen the resources needed to overcome service-related trauma and daily stress.

Further group discussions create a safe space for important stories to be told, giving voice to their human condition.

The program was created in 2012 by the founders of the Milwaukee arts think-tank called the Battery Factory, who were inspired by the Massachusetts “Shakespeare in the Courts” program for juvenile offenders.

The Courts program was designed in 2001 by two Pittsfield artist educators in collaboration with Judge Paul Perachi to give troubled teens a consistent experience of being responsible for their choices without a right/wrong judgment being made. Judge Perachi, a former high school principal, agreed to assign the participants to the program en lieu of community service or, in some cases, lock-up. The therapeutic technique relies on conflict-heavy scenes in Shakespeare’s plays with strong dialogue between two characters, with no long speeches.

“I have witnessed first-hand the extraordinary impact,” said Judge Perachi. “Their self-esteem soared and they seemed to be able to navigate the treacherous waters of their adolescence with greater ease and less anger. Working on this project will decrease the likelihood that they’ll appear before me in the future.” 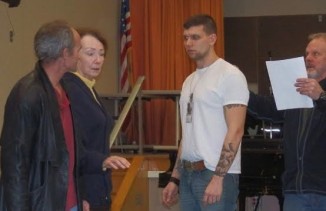 “The Feast of Crispian bases its techniques on the Shakespeare work in Massachusetts,” said Rebecca Holderness, a stage director, choreographer and theater professor who founded The Battery Factory. “This is an innovative strategy to confront new and old challenges facing our veterans.”

One recent participant, a USAF Veteran, said, “I found an inner reserve of emotions that I now have a way to tap, to access some of the pain and express it in a safe and healthy way.”

Feast of Crispian, named for the rallying cry in Shakespeare’s Henry V, serves veterans of all military branches – active, reserve or guard – and of any discharge status. All veterans are invited to participate; no theater experience is needed and there is no fee. The only requirement is a commitment to working respectfully with each other.

For the full production of Julius Caesar in 2015, The Battery Factory intends to bring together the Milwaukee area theatre community to provide the costumes, make up, scenery, etc. to provide a rich experience for the veterans who have benefitted from any of the nine intensive weekend workshops so far.

Nancy Smith-Watson, an actress who worked with the Feast of Crispian from the beginning, and who facilitates the veterans’ weekends, told the Milwaukee Journal-Sentinel that “most of Shakespeare’s characters say exactly what they mean, something that rarely happens in the real world. And by digging deep into the feelings and motivation of the character they’re portraying, they’re deepening their ability to connect emotionally.”

(WATCH a video below from the VA [ends at 12:10] or READ a feature in the Milwaukee Journal-Sentinel)