Home All News Religion Before Tree Gets Cut Down, Buddhist Monastery Writes Touching Notice to the...

A tree that has grown on a street corner in Berkeley, California for one hundred years was scheduled to be cut down, but a Buddhist monastery that had been its neighbor for a quarter century gave it a touching farewell ceremony, and wrote a notice for all the wildlife that would be affected.

The Douglas Fir planted on Grant and Bancroft Streets was in poor health and its gangly limbs, any of which might have fallen unexpectedly, were endangering pedestrians.

Knowing the tree was going to be felled, Heng Sure, who is the Reverend at the Berkeley Buddhist Monastery penned a tribute that was shared to Facebook by a friend of one of the neighbors.

“To the Grand and Nobel Douglas Fir on Grant and Bancroft Streets and to all beings living in this tree: birds, animals, insects, spirits, and others:

We respectfully inform you that due to your poor health and taking into consideration the safety of the community, we will need to remove you on Monday, November 18, 2019. Mindful of your century of life and grateful for the shelter that you have selflessly provided to all, we wish your spirit to move on.

All beings who have made their home in this tree, please find other lodgings by Monday. We wish you no harm, and we apologize for the inconvenience this will bring to you and your families. We hope that you will find another place to live without difficulty and that you and your descendants will flourish and prosper.” 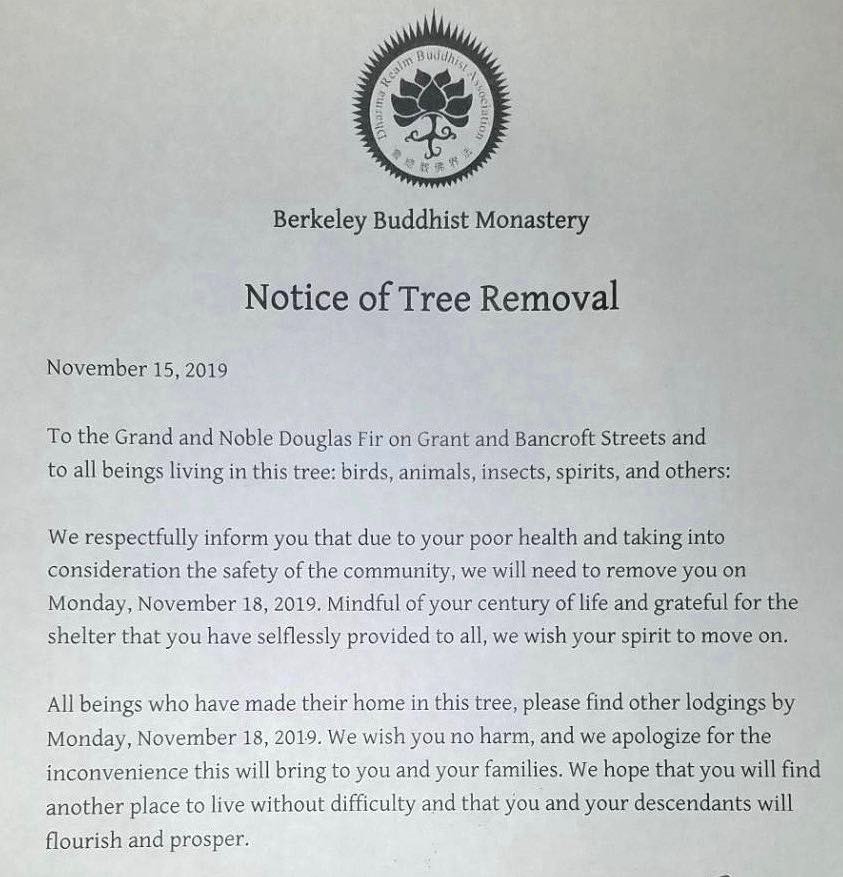 Julia Goerlitz of Richmond, CA posted a photo of the notice with gratitude, saying “Thank you for this respectful notice to the tree, it’s inhabitants and neighbors! How many times in my life have I been shocked and horrified to suddenly find an old friend being unceremoniously removed without any acknowledgement of its years of service and gifts.”

John Coveney, who has lived under the shade of the tree for half of his lifetime (30 years), mourned the loss but understood the necessity.

“It’s a very unconventional conifer, growing with its limbs akimbo, a perpetual dance of reaching for the sky… but the needles are sparser, the sap drips more, and in past years a large limb has come crashing down in a storm.”

“It will leave a hole in the sky for sure,” John says.

But also leave a gap in his heart.

“I think of the many years it shaded our patio, the moonlight through its limbs like a Japanese drawing as we took our evening hot tub, the sounds it made in a storm.”

RELATED: See All the Good News Stories About Trees on GNN

Julia told GNN, “The letter touched such a deep cultural need that we have to honor our connections to the earth by more openly and directly expressing our respect and reverence for all of its living beings.”

Rev. Heng Sure held a private ceremony for the tree last Sunday morning with a dozen or so neighbors who wanted to pay their respects. He lives half the year in Queensland, Australia, and left the neighborhood monastery—which is the site of the Institute for World Religions—a couple of days after the ceremony.

As for the fir centurion that lived on a fertile plain sloping towards the San Francisco bay, because it had not grown in the forest—and had the sun and sky all to itself—it was able to live a full and expressive life.