Home All News World Civilian Experts on Farming and Governance Will Expand U.S. Commitments to Afghanistan,... 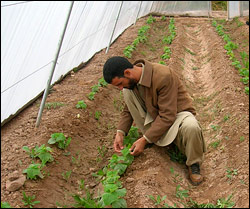 Even after U.S. forces have left Afghanistan, an army of U.S. civilians will remain to help the country build its democratic institutions and restore its agricultural economy, Secretary of State Hillary Rodham Clinton told the U.S. Senate Armed Services Committee this week. Civilian assistance programs are also part of the administration’s strategy in Pakistan.

In her testimony on December 2, Clinton said US contributions of “more civilians and more assistance to Afghanistan, and significantly expanding our civilian efforts in Pakistan,” will continue. Clinton termed it a “significant civilian commitment that will endure long after combat forces leave.”

Clinton said civilian efforts are already yielding results, with experts and advisers helping to craft policy inside government ministries, providing development assistance in the field, and working in scores of other roles. (Photo above: USAID supported greenhouses allow farmers in Afganistan like Mola Shah Goel to grow fruits and vegetables for sale year round.)

The civilian component includes State Department personnel with expertise in the rule of law and governance, and experts from the U.S. Department of Agriculture with 40 years of experience who are helping the country restore its agricultural sector, the traditional core of Afghanistan’s economy.

“This will create jobs, reduce the funding that the Taliban receives from poppy cultivation, and draw insurgents off of the battlefield,” she said.

The Obama administration is on track to triple the number of civilian positions in Afghanistan to 974 by early 2010, and Clinton said each U.S. civilian employee “leverages 10 partners” inside the country, ranging from local Afghan staff to experts employed by nongovernmental organizations.

The civilian component has worked with Afghan authorities to raise the country’s student population from less than 1 million — virtually all boys — when the Taliban government was overthrown in 2001, to the current level of 7 million, 40 percent of whom are girls. Clinton said the goal is to increase the number of students by an additional 5 million to 6 million.

Agricultural experts have rehabilitated irrigation canals in the country and worked with Afghanistan’s agricultural ministry and international donors to provide Afghan farmers with better fertilizer and farm equipment, as well as heartier seeds that resulted in a “bumper wheat crop,” the secretary said. The country also exported its first big shipment of apples and pomegranates to India. These “are measurable benchmarks,” Clinton said.

The secretary said U.S. civilians from the Department of Justice, Drug Enforcement Administration and Federal Bureau of Investigation are enhancing their law enforcement cooperation and intelligence sharing on corruption and major crime in Afghanistan. In addition, the United States is withholding assistance from some Afghan ministries until corruption has been “cleaned out.”

President Obama’s strategy includes civilian assistance to Pakistan. The secretary said the U.S. relationship with that country “needs to be anchored in common goals of civilian rule, robust economic development, and the defeat of those who threaten Pakistan, Afghanistan, the United States, and the rest of the world.”

During her visit to Pakistan in October, Clinton outlined millions of dollars in U.S. assistance for Pakistan ranging from humanitarian, education and security assistance to microloans and a cellular-phone network.