Home All News #DoItForPeace Campaign Kids to Tally One Billion Acts of Peace in Just 10 Days... 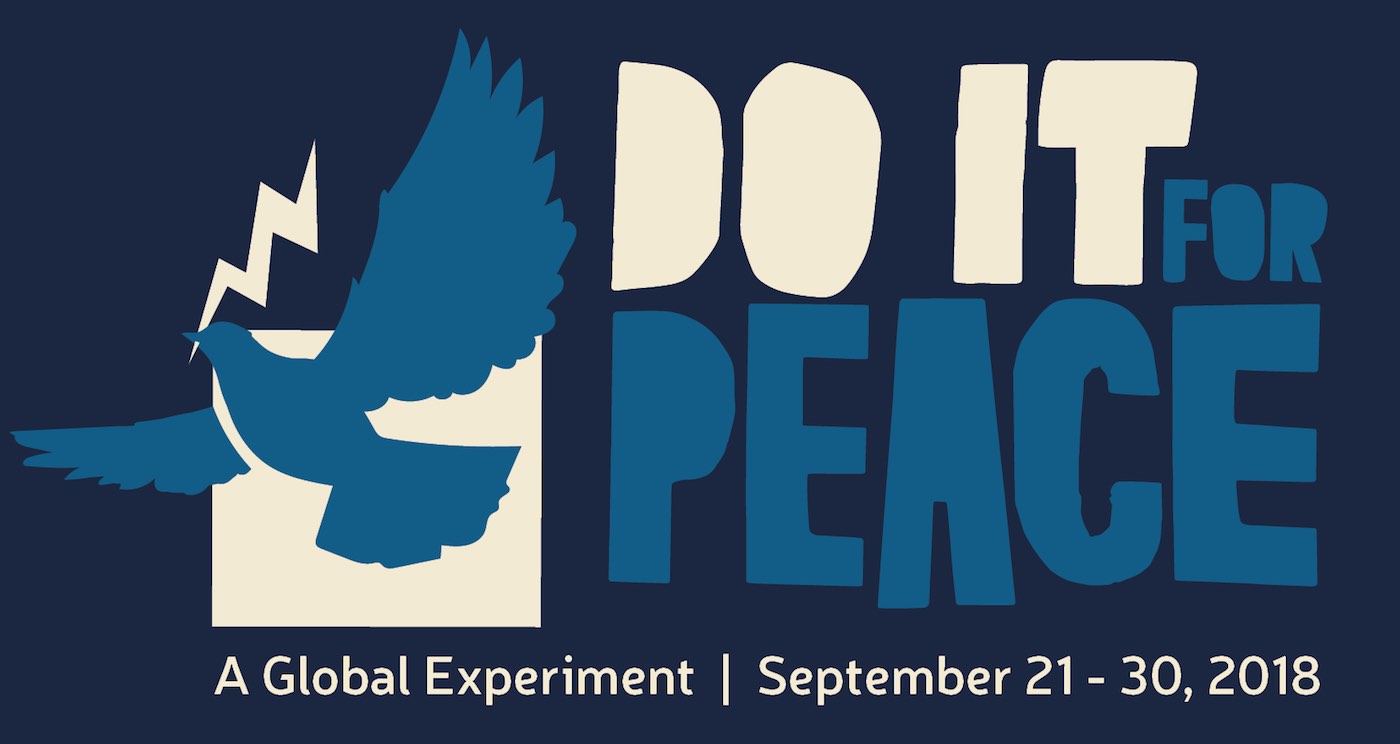 We are about to find out if the world can accomplish a billion acts of peace in ten days, thanks to a global experiment called #DoItForPeace.

Today, on September 21st, the International Day of Peace, two global nonprofits, Kids for Peace and Peace One Day, joined by Good News Network, have launched #DoItForPeace, a worldwide campaign to ignite one billion people to take action for peace.

#DoItForPeace began lighting up the world with 1000 ‘Ignitors’ completing their act of peace, and sharing it on social media (tagging it with #DoItForPeace), and then inviting five friends to do the same. By using simple math, at the end of ten days, 1.2 billion people—over 10% of the world’s population—will have taken a moment to shift their consciousness toward peace.

The ten-day initiative was developed by Kids for Peace, with its peace-building network of 10 million youth in over 20,000 schools in 121 countries. Joining them is Peace One Day, the organization founded in 1998 by Jeremy Gilley, the British filmmaker who was the mastermind behind the United Nations’ unanimous decision to adopt the first-ever annual day of global ceasefire and non-violence, now known as Peace Day – September 21.

Several key events will fuel the ten-day campaign, from sea to sky. Kids are forming their own peace signs during launch events in USA, UK, Kenya, Pakistan, India, and Australia. Next Thursday and Friday 33 Guinness World Record-holding skydivers in Oceanside, California will perform the first-ever skydiving peace sign formation. And, on Tuesday, September 25, professional surfer Rob Machado will lead surfers to create a peace sign on the waves at 6:30 am at Cardiff Reef, California.

POPULAR: Muslims in Town Adopt a Sacred Hindu Tenet So They Won’t Hurt the Feelings of Their Religious Neighbors

Acts of peace by Ignitors and the public will be tracked and dynamically visible using technology that will light up a spinning globe as hashtags are circulated on social media. Powered by our tech partner InsertChange.org, it is believed to be the first graphical representation of its kind documenting worldwide hashtags—along with posted videos and images—allowing us to watch where people are participating, along with names of those signing up as Ignitors.

Amplifying the impact of the event will be full coverage on Good News Network, the #1 website for positive news and inspiring content. GNN Co-owner Anthony Samadani became the Do It For Peace master uniter, bringing together strategic partners like Peace One Day, Insert Change, and TaTaTu, the campaign’s major sponsor.

MORE: Forgiving the Unforgivable: Mom Worked With Daughter’s Killers to Bring Hope to a Desperate Community

“Everyone has a role to play in creating peace in the world, beginning with their own hearts,” Samadani pointed out, reflecting on the recent uptick in suicides. “GNN is honored to support this inspiring initiative, which has unprecedented potential to shift global consciousness.”

“Children of all ages around the world have decided they want to lead a shift from a culture of fear and division to one of love and respect,” says Jill McManigal, Co-founder and Executive Director of Kids for Peace.

Sign-up for free to be an Ignitor today at www.doitforpeace.org. Make a creative peace sign, reach out to someone you need to forgive, or create a video of a peace song, poem, or prayer… Whatever you do, #DoItForPeace over the next ten days!

The campaign’s main sponsor is TaTaTu, a new entertainment platform launched by Italian filmmaker Andrea lervolino that rewards users for watching free movies and gaming online with advertisers paying users in blockchain-based cryptocurrency tokens—and additional tokens being earned whenever they get friends to join and watch, too. This #DoItFoPeace sponsorship is the company’s first foray into social causes as part of TaTaTu’s larger push into community activism & global stewardship.

Let’s all take a moment today, to take on the heart of a child and watch the world light up, using the hashtag #DoItForPeace.