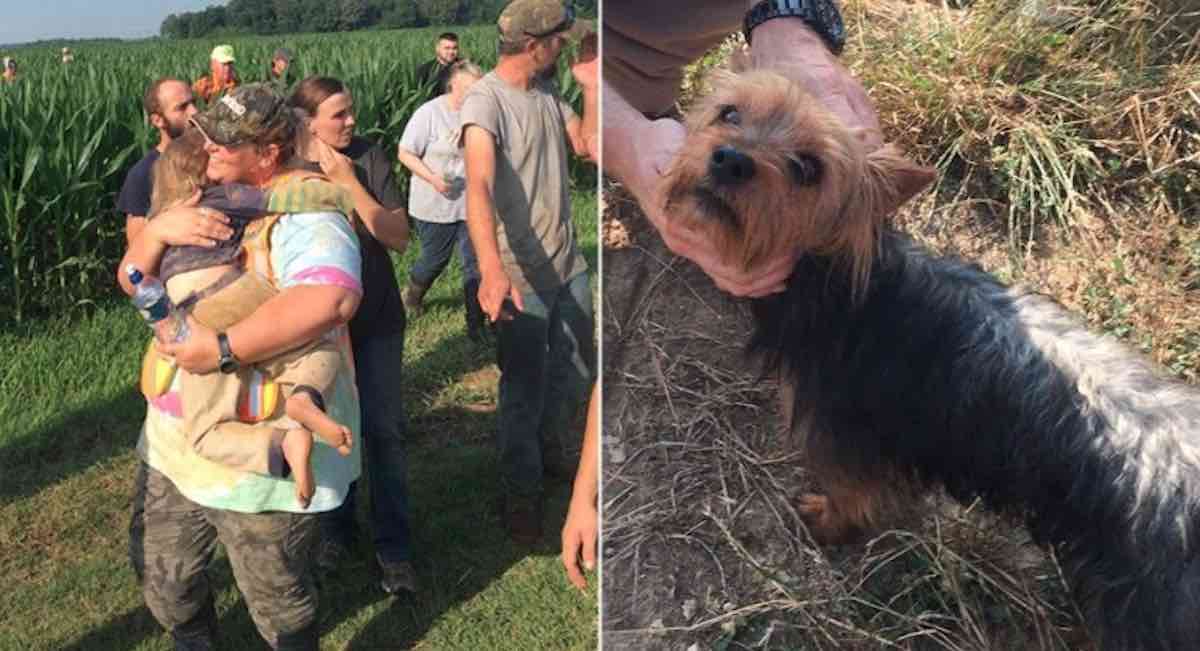 A Yorkshire terrier is being hailed as a little hero for his part in rescuing a 3-year-old girl who went missing from her home on Thursday night.

When Remy Elliott first disappeared from her home earlier this week, her mother Timber tried walking around their Qulin, Missouri property, calling the youngster’s name, but to no avail.

The concerned mother-of-three then called family and friends to help look for Remy. When members of the community caught wind of the situation, however, the search party eventually grew to include 100 volunteers and law enforcement officers.

Due to the density of the corn, the search was called a “stressful and emotional” time. Even with helicopters flying over head, the crew spent hours searching the cornfield until their flashlights started to die and they decided to call it a night.

RELATED: While Pit Bull Rescues Family From House Fire, She Pulls Baby to Safety By Her Diaper

“The corn feels like razor blades cutting you, especially for a child,” one volunteer rescuer told KFVS. “And you don’t hear well in the corn either, so when somebody is yelling your name you can hear them but you don’t know where it is coming from.”

The next morning, the crew renewed their efforts at 6AM. Two hours later, their search dogs were barking in the midst of the cornfield when they heard a tiny canine voice bark in response.

The rescuers finally found Remy roughly half a mile from the house curled up on a patch of broken corn stalks. More importantly, her dog, Fat Heath, had been there to keep an eye on her. If he had not been there to call the rescue dogs towards their location, the search may have taken a lot longer.

WATCH: Migrant’s Incredible ‘Spider-Man’ Rescue That Earned Him Citizenship and a Job

“They said that she was asleep when he picked her up,” Timber told the news station. “She was definitely exhausted, hot, really sweaty and it took a while to drink anything. She said she wasn’t scared because Fat Heath was there. If he wasn’t I think she would’ve been terrified.”

Apart from some mosquito bites, the child is unharmed – and it’s probably pretty safe to say that Fat Heath will be getting a steak for being such a good boy and watching over his companion through the long night.

This is what #Community looks like. Law enforcement, 1st Responders and community volunteers coming together to find a missing child. Her dog stayed by her side all night. #StrongerTogether pic.twitter.com/aIDMtG6JTW