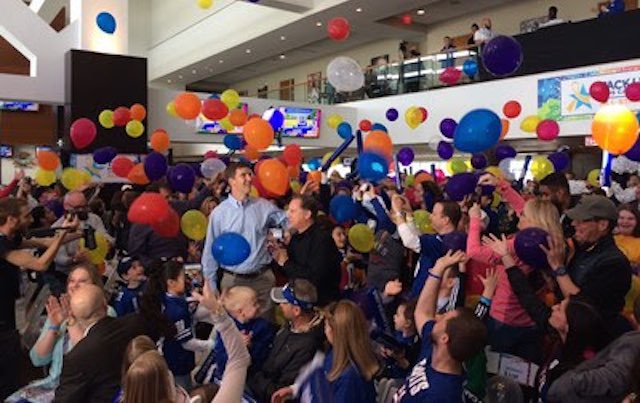 The beloved New York Giants quarterback Eli Manning just scored the goal of a lifetime with these kids.

More than 500 youth and community groups joined stars from the world of sports to celebrate raising more than $250,000 as part of “Eli’s Challenge,” a campaign led by the star football player.

The campaign is part of the Tackle Kids Cancer Program, which raises money for critical research and programs at the Children’s Cancer Institute at Hackensack Meridian Health Hackensack University Medical Center.

“It is truly inspiring to see how many community groups held bake sales, car washes and other fundraisers for this cause, and I want to challenge more of them to join our team,” said Manning, who pledged to match the first $100,000 in fundraising from local community groups – which they exceeded in just a few short months.

Five of the most innovative, creative and successful fundraising campaigns created by kids and community groups were honored, resulting in a check for $250,000 from “Eli’s Challenge“ to the Tackle Kids Cancer program, which benefitted from the New York Giants support.

“We value our relationship with Hackensack University Medical Center and are honored to be part of Tackle Kids Cancer. The work that is done by the Children’s Cancer Institute and those who have contributed to Tackle Kids Cancer has served as an inspiration to Eli and all of us,” said Allison Stangeby, vice president of Community and Corporate Relations. “We are proud of Eli’s work in our community and his selfless support of the Children’s Cancer Institute.”

“The Foundation is proud of the partnership we have with the New York Giants and its players,” said Jon M. Fitzgerald, president of Hackensack University Medical Center Foundation. “Eli Manning’s commitment to Tackle Kids Cancer has extended far beyond what we could have imagined. Not only has he volunteered to be the face of our campaign, but he has made numerous visits with the children, families and health care team at our Children’s Cancer Institute. With Eli’s Challenge, he has taken his role as champion of this cause to higher level, and we could not have raised more than $4 million for our Tackle Kids Cancer initiative without his support.”

The Children’s Cancer Institute at Hackensack University Medical Center consists of dedicated clinicians and researchers specializing in pediatric cancer. With more than 100 active oncology and transplant clinical trials currently open, it is leading the charge to cure childhood cancer.

“While extremely rare, pediatric cancer is the number one cause of death by disease in children in the U.S.,” said Stephen Percy interim chairman, Department of Pediatrics, Joseph M. Sanzari Children’s Hospital. “Every dollar received through the Tackle Kids Cancer campaign will support our most important programs and research.”