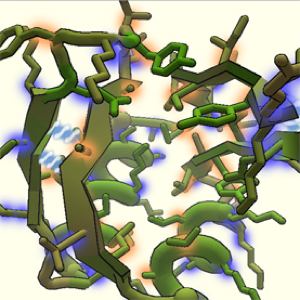 Following on the success last September of video gamers to solve the elusive riddle of an HIV enzyme within three weeks, they have again astonished scientists.

Players of the online puzzle game Foldit have redesigned an enzyme model by fiddling with folding proteins on their home computers in search of the best-scoring (lowest-energy) patterns.

“I worked for two years to make these enzymes better and I couldn’t do it,” says Justin Siegel, a post-doctoral researcher working in biophysics in Baker’s group. “Foldit players were able to make a large jump in structural space and I still don’t fully understand how they did it.”

The Fold-it games are devised by the Computer Science and Engineering Departments at the University of Washington to put players’ intuitions to work on problems for researchers in fields like biochemistry.

Next up will be a more useful target–potent versions of small protein inhibitors that bind to and block the 1918 pandemic influenza virus.

(READ the story in Scientific-American)