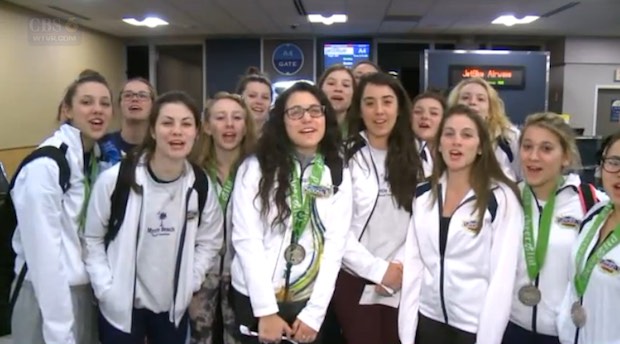 When airport problems stranded a business traveler on the West Coast and a cheerleading team on the East Coast, good Samaritans at rival airlines, JetBlue and Alaskan Airlines, stepped up with good deeds to get them home.

Cheers of “Thank you, JetBlue,” went up at Richmond International Airport from a team of championship cheerleaders rescued by the airline Tuesday after they faced a three-day wait in South Carolina.

The team from Winthrop High School near Boston had won a national title in Myrtle Beach over the weekend. When the cheerleaders arrived at the airport to fly home Monday, they found out that Spirit Airlines had cancelled the spirit squad’s flight. There were problems with lights at the airport and there wouldn’t be another flight to Boston until Thursday.

That’s when JetBlue stepped in with a bit of corporate kindness. 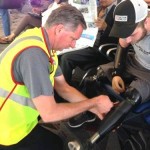 The rival airline, having heard about the girls’ troubles, sent a van to take the team to Richmond in time to catch a Tuesday morning flight home.

“It’s been a long weekend of no sleep,” one of the cheerleader’s told WTVR in Richmond. “You can either be happy and giggly or upset. But we’re national champions, so we’re very happy, very giggly.”

Meanwhile on the West Coast, Miriam Thomas ran into a chain reaction of travel problems on her Delta flight from Vancouver, British Columbia, to a business meeting in California. Thomas faced delays and a diverted flight that landed in Portland, Oregon, before returning to Seattle for an unplanned overnight stay there.

The next morning, she got bumped from her rescheduled flight. Delta ticket agents couldn’t get her on another flight until the following day — too late to make her meeting. If that wasn’t complicated enough, a ticket glitch charged Thomas a second time for her rescheduled flight. It left her with no money and no ticket to get home. 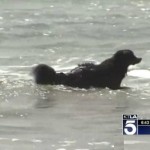 That’s when Judy, working at the Alaskan Airlines counter, decided to help. She pulled out her own credit card and paid for a ticket to get Thomas back to Vancouver.

But the goodwill didn’t stop at the ticket counter. Thomas says, “I was sitting up at the gate waiting for the flight and she came by asking me how I was and offered me money for coffee.”

A quieter cheer rang out for Judy when Thomas thanked her on Twitter and paid forward the kindness:

Update: I got in touch with @AlaskaAir Judy! Also, @Delta apologized & offered me a full refund. I told them to #PayItForward instead.

(WATCH report on JetBlue’s rescue of cheerleaders below)