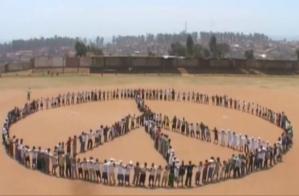 Voice of America reports India is again warming toward rival Pakistan and calling for progress on Kashmir.

India’s Prime Minister has called for a treaty of peace and friendship with Pakistan. The overture aims at injecting fresh momentum into a flagging peace initiative between the two nuclear powers.

The Indian leader reiterated New Delhi’s firm commitment to peaceful relations that began between the neighboring nuclear giants in 1999. He praised Pakistan President Pervez Musharraf’s assistance in the fight against terrorism. In recent years, the two countries have opened new transport lines to help families and businesses in border regions. A ceasefire along the Kashmir border has been holding and trade ties are improving.

Pakistan and India have fought in three wars since British rule of the subcontinent ended in 1947. In 1998, each of the countries became functional nuclear powers as they conducted tit-for-tat underground nuclear tests. For 35 years they stubbornly defied each other’s territorial claims over the disputed area of Kashmir.

Pakistan welcomed the Indian leader’s statement, saying it reflected many positive sentiments and underlined the need to solve the Kashmir dispute.