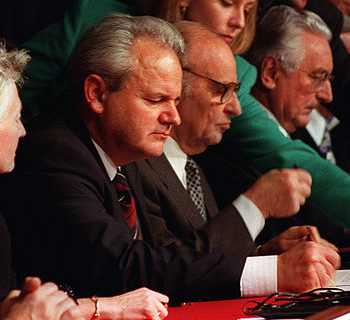 For the first time in history the Serbian people have a president chosen by themselves in free elections. Vojislav Kostunica, 56, defeated Slobodan Milosevic by a wide margin and, despite Milosevic’s attempts to circumvent the election results, was sworn in as president on September 30, 2000.

The world watched in amazement as a half million Serbs, answering opposition party calls to march on Belgrade, forced Milosevic to relinquish control of the country he had ruled as dictator for 13 years.

Despite the outpouring of discontent, and a plethora of weapons gathered from captured police stations, only two died and fewer than 100 were injured in the riots that overtook Milosevic strongholds like the Parliament building and Serbian State Television headquarters.

Kostunica assumed power in an inaugural ceremony at a shopping mall that substituted for the smoldering parliament.

“This is a great moment for our country,” he declared. “After all the suffering this may bring us peace.”

Fueled by weariness of losses through three wars in Bosnia, Croatia,and Kosovo, the Serbian people finally flooded the streets in celebration of victory.