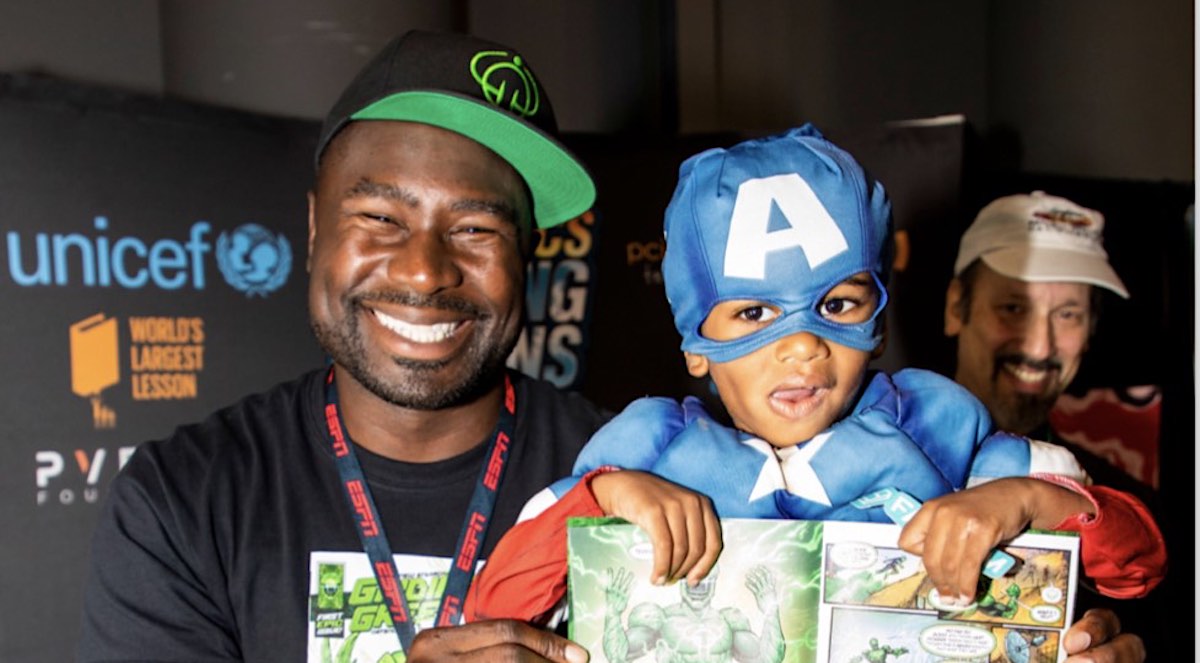 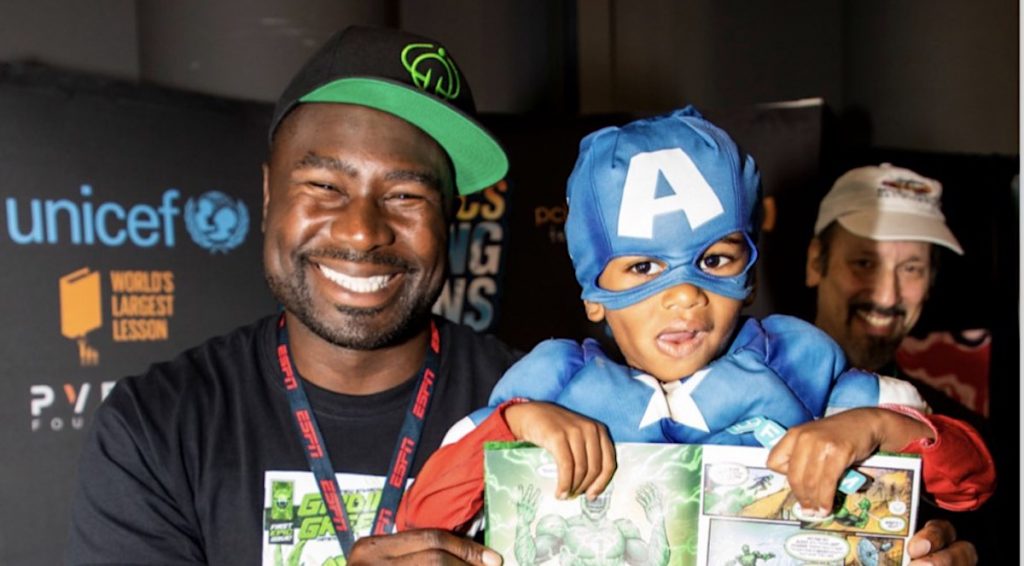 Ovie Mughelli had an impressive career in the NFL, playing as an All-Pro fullback for the Baltimore Ravens and the Atlanta Falcons. He is now blocking on a different kind of offense— fighting for a healthy planet.

“It’s not a Democrat, Republican, or even a policy issue,” Mughelli said about protecting the environment. “It’s all about people. It’s all about taking care of your fellow man and it’s all about saving the children.”

Both his daughter and son were born premature, weighing just 2 pounds. While they fought for their lives in the hospital, Ovie learned that they were held there even longer because of the unsafe air quality in Atlanta.

“I realized a sense of urgency had to be put towards the environment…and I can’t do that unless I get everyone excited about making practical lifestyle changes to help our planet.”

So, he makes green education fun, engaging, and accessible. In 2018 he launched Gridiron Green, a sustainability comic book developed in partnership with UNICEF that emphasizes STEM technology to solve problems. 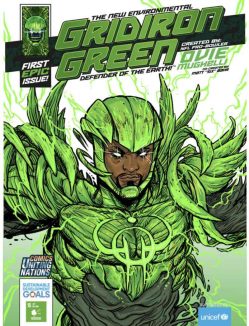 The comic storyline was developed around the United Nations 17 Sustainable Development Goals, and focuses on Goal 15: Life on Land.

Ovie is harnessing the ‘universal power of sport’ in comic book form, to inspire generations of eco-conscious citizens. His graphic novel can guide and motivate diverse kids from underserved communities to grow into the green leaders of today and tomorrow.

In 2009 he founded his nonprofit Ovie Mughelli Foundation to use the latest technology to make ”environmental protection education available to everyone” while emphasizing STEM education.

His new crowdfunding project was just launched in partnership with Projects for Good, a community site that aggregates support for socially responsible projects. His goal is to expand the storyline of the comic series into a curriculum that meets state standards, as well as create a companion VR module that interactively educates anyone on day to day, practical lifestyle choices they can make to help the environment and to develop STEM skills for the workforce. 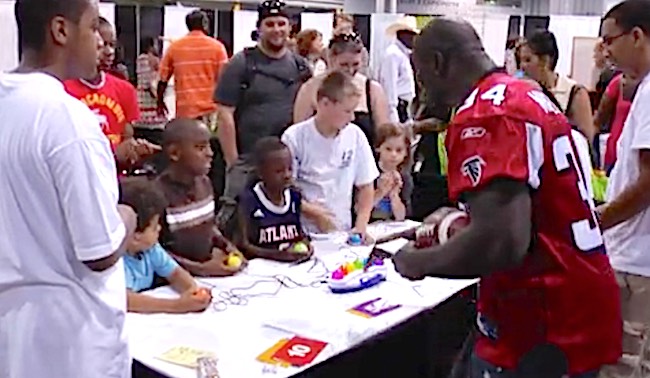 Help Ovie protect our planet: Check out the project; donate; or help it go viral by sharing with your network.

Projects For Good sat down with Ovie to hear about what inspires him and how the power of sport can create movements.

What inspired you to fight for the Planet?

Growing up, I witnessed many people who didn’t have basic human rights. I always wished I could do more. I think that was always the little superhero in me, even back then. Luckily the NFL and sports broadcasting has given me the platform to bring awareness to environmental issues. Safe water and clean air are basic human rights. When I was little I was into the comic Captain Planet. I saw myself in Kwame, the main character. He was young and African and fighting to protect the environment. And then I realized, ‘Hey a comic is a great way to educate diverse groups because it is an art form that appeals to both youth and adults, of all demographics.’ Captain Planet made me realize there is a way to educate people and get them excited to make lifestyle changes in their mindset and day-to-day behavior.

What is the biggest challenge you’ve faced?

The biggest challenge I’ve faced is that no one understands how big of a problem this is. Apathy is real. People think they’ll deal with this next week, next year, or leave it for the next generation. They think we can kick this down the road and it won’t get worse. But it’s going to get worse and we need to make it better now. Unfortunately there are so many issues that this one almost gets forgotten, especially in the sports world.

Is there a leader or historical figure that inspires you?

I’m fascinated and inspired by Nelson Mandela. When I talk about making sustainability education fun I often use the phrase “the power of sport.” Mandela said, “Sport has the power to change the world. It has the power to inspire, it has the power to unite people…it speaks to youth in a language they understand.” I believe the comic book will have the same power; it will speak to a diverse group of people in a format that unites people. Everyone loves a good superhero story, a story where justice prevails, and the comic will help people understand that they can be a hero in their time here on our planet. (Read the full interview at Projects for Good.)

You can make a difference! Take one minute to share the project and help protect our planet. It’s easy, once you get to the project page hit the SHARE button and share to the social network of your choice.