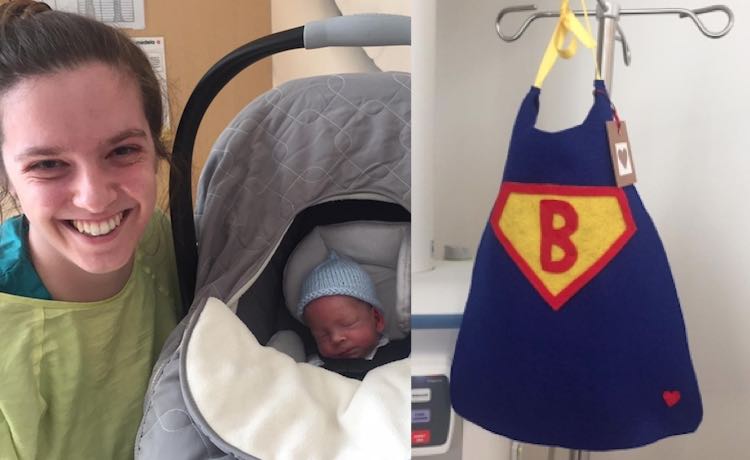 Babies in the neonatal intensive care unit may not look like stereotypical comic book superheroes, but they do to this nurse.

Stephanie Treherne of the Jewish General Hospital in Montreal is being hailed for going above and beyond the call of duty of her job by hand-stitching tiny superhero capes for the intensive care babies.

For the last nine months, she has made about 100 felt capes featuring the baby’s initial emblazoned on the front. Since Treherne generally prefers to leave them with the baby, rather than handing it to anyone directly, parents never get to thank her properly – until now.

That’s because one of the intensive care baby’s mothers, Michelle Cooper, was so overwhelmed with gratitude for the nurse’s gesture, she asked the hospital staff how she could go about meeting and thanking Treherne.

Cooper’s two-month-old son Benjamin was born prematurely and had to be supervised by medical staff until he was healthy. On one of Cooper’s visits to see her son in the hospital, Treherne’s cape was hanging from the IV pole with a note that read: “To our little Superhero, love Stephanie T.”

“We were very surprised that one of the nurses that we haven’t even worked with or seen or anything yet had left that,” Cooper told CTVNews.ca “Given the hormones and everything, I was very emotional and I just started bawling my eyes out when I saw that cape.”

Treherne says that she just “wanted to do something nice for the babies”.