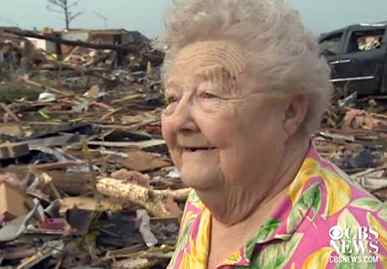 An elderly woman being interviewed by a television crew was literally counting her blessings after her beloved schnauzer peaked out from beneath the rubble in Moore, OK and was spotted by a producer.

“Bless your little bitty heart!” cooed Barbara Garcia, who stooped down surrounded by the debris of her flattened neighborhood.

“I thought God just answered one prayer,” she said, alluding to her own safety. “He answered both of them.”

(WATCH the video below or READ the story from CBS)