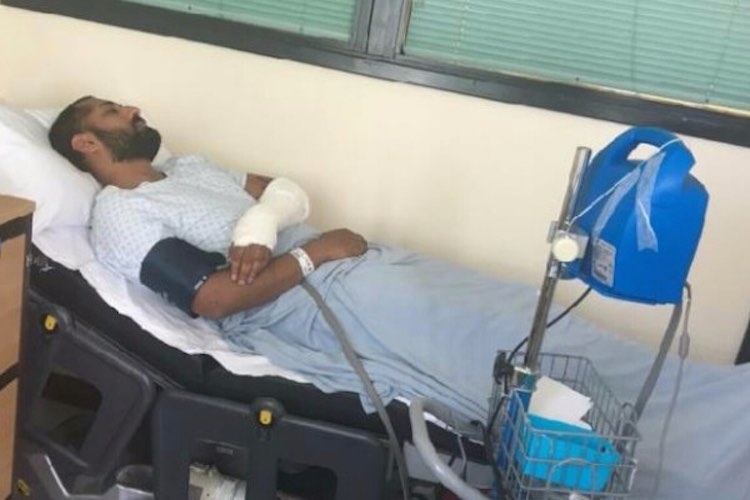 Amo Singh is being hailed as a hero by the Polish community for his heroic interference with a gang attack in progress.

On March 26th, the 33-year-old man was in his shop in Gloucestershire, England when he and his wife Sandy saw a drama unfolding on their CCTV footage.

Two cars pulled up in front of a 15-year-old Polish teen and his girlfriend who were walking by in front of the store. Two women and six men proceeded to get out of the car and start beating the boy with crowbars.

RELATED: Karma Comes Back Around for Man who Broke Religious Rule to Help Boy

Mortified by the violence, the shopkeeper ignored his wife’s pleas to not interfere and grabbed a baseball bat to try and scare the gang away. The gang then turned their attention on Amo.

The group rained down blows on the young shopkeeper, even going so far as to run him over with their car – twice.

Sandy feared that her husband was dead, but after he and the Polish teen were taken to the hospital, Amo was confirmed to only have bodily bruising, a broken wrist, and a head injury that was treated with stitches.

The Polish community responded by creating a GoFundMe page to raise money for any financial loss Amo’s business may sustain while he is in the hospital. Though the campaign has already raised $13,500, Amo and Sandy say that they would rather give the money to charity.

Another Polish man wrote a letter to the mayor of Krakow asking if they could invite Amo and his family to the city for a weekend as a gesture of thanks for his heroism.

Police are investigating the crime and – despite allegations that the attackers were yelling racial slurs – do not believe it was a racially-motivated attack, according to the BBC.