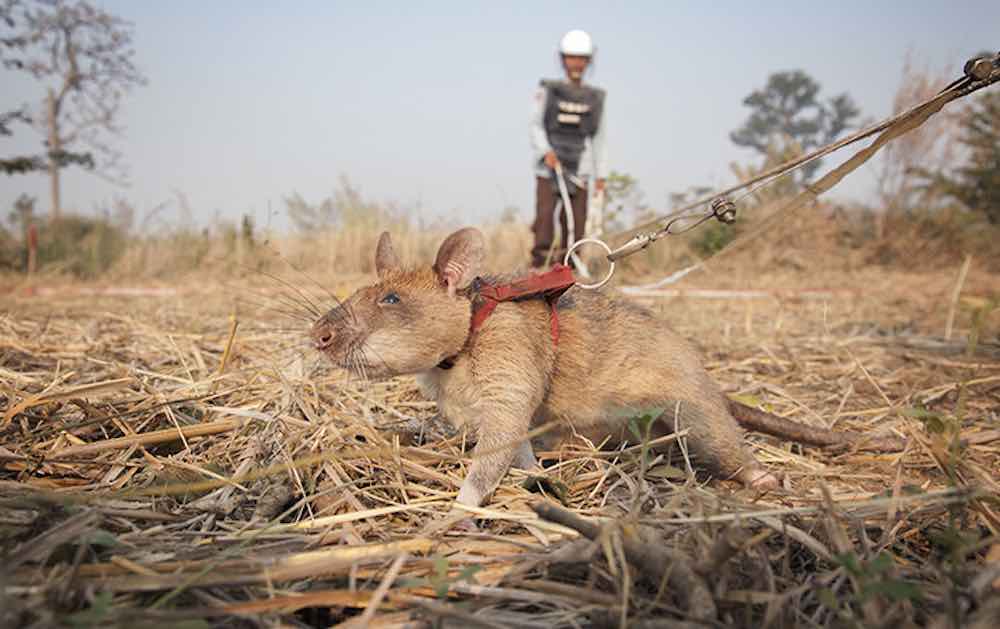 These tiny bomb detectors are helping to clear the way for their larger animal counterparts to safely migrate the African plains without risking an explosion.

These African giant pouched rats, nicknamed “HeroRats”, have made international headlines for their groundbreaking work in clearing minefields with their noses.

Because they are too small to set off the explosives, the rodents can sniff out the bombs and allow their human counterparts to safely disarm or detonate them.

APOPO, the charity that employs the clever critters, has been tasked by the Zimbabwean Ministry of Defense with clearing the deadly landmines inside what is now the Great Limpopo Transfrontier Park (GLTP) – the largest conservation area in the world, spanning South Africa, Mozambique and Zimbabwe.

The mines don’t just pose a threat to endangered wildlife species such as lions, tigers, and elephants – they have also proven risky to the Zimbabwean communities who are cut off from water sources, livestock grazing lands, and cross-border trading routes.

Additionally, clearing the mines could usher in millions of dollars worth of international eco-tourism for Zimbabwe.

Christophe Cox, CEO of APOPO, said: “We are proud to be able to help Zimbabwe rid itself of these mines during an incredibly important period in the nation’s history. We saw this approach work in Mozambique, which is now mine-free, and believe we can help accomplish the same in Zimbabwe.”

Mozambique became the first nation to be declared “mine-free” after 22 years of work with the government removed more than 171,000 landmines, and opened up more than 4,200 acres of land (1,700 ha) for safe passage to the local communities.

If you’re worried about how the rats feel about working in such a dangerous field (pardon the pun), have no fear – the NGO has assured that their 300 bomb-sniffers are treated like the heroes they are.

CHECK OUT: Orange is the New Green For Thriving Costa Rican Forests, Thanks to Orange Peels

Over the course of the Belgian charity’s 20-year career, the rats have safely located over 106,000 mines, and they have also proved efficient in sniffing out tuberculosis. According to APOPO, the HeroRats have detected over 12,000 TB-positive patients who were missed by their clinics, and prevented almost 90,000 potential infections of tuberculosis.

You can help support the HeroRats’ mission by “adopting” one of the cute little critters at the APOPO website.