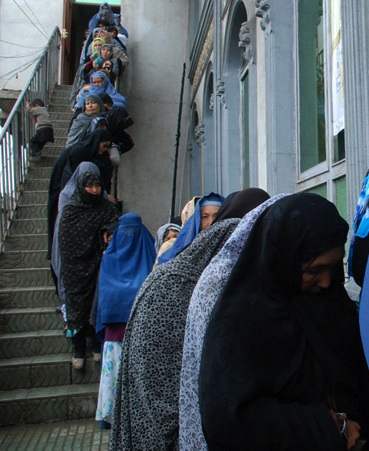 Afghanistan’s presidential election closed on Saturday amid relief that attacks by Taliban fighters were fewer than feared for a vote that will bring the first-ever democratic transfer of power in a country plagued by conflict for decades.

It will take six weeks for results to come in from across Afghanistan’s rugged terrain and a final result to be declared in the race to succeed President Hamid Karzai.

“The millions of women and men who cast their ballots are a testament to the courage and the commitment of Afghans to exercise their rights and shape their future,” said United Nations chief Ban Ki-moon in a statement highlighting the “momentous achievement,” despite threats and intimidation.

Noting the strong participation of women in the polls, as election workers, observers, candidates and, above all, as voters, Mr. Ban said the elections marked “another step forward for Afghan women in taking their rightful place in society and having a say in their country’s future on an equal basis with Afghan men.”

The Secretary-General commended the Afghan national security forces who, in the face of serious Taliban threats, showed “professionalism and dedication that enabled citizens to vote on 5 April.”

The head of the UN Assistance Mission in Afghanistan reported, “Ordinary Afghans turned out to vote in remarkable numbers, defying Taliban attacks and threats. Often in long queues and bad weather, voters patiently waited to exercise their basic human right to vote.”

(READ the report from Reuters)